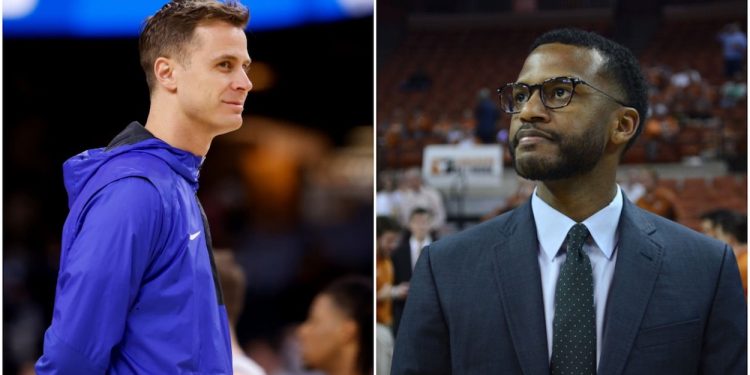 For more than four decades, Coach K ruled the roost in Durham. His ways of doing things became the law of the land. Take, for example, his insistence on filling the coaching staff with former players. While that was never formally codified, it was simply the way the program’s patriarch did things, and no one was going to overrule him.

These days, though, things have changed. Jon Scheyer is in charge and has already shaken things up by hiring Jai Lucas. While the assistant comes with quite the resume, he never played for the Blue Devils.

That reality, however, didn’t concern the new bench boss. In a recent interview with Andy Katz, Scheyer explained why he looked outside of “the Brotherhood” and chose Lucas. In his mind, the opportunity was simply too good to pass up.

Jon Scheyer felt Jai Lucas ‘fit’ at Duke, despite not playing for the Blue Devils

When Duke announced the hiring of Jai Lucas earlier this spring, the move was pretty well received. Despite his relatively young age, the former Kentucky assistant has already forged a reputation as a top-notch recruiter. The only potential red flag, however, was his lack of connection to the Blue Devils. As mentioned above, playing under Coach K had become an unofficial requirement for joining the coaching staff.

Scheyer, however, wasn’t too concerned about breaking with tradition and hiring someone from outside Cameron Indoor Stadium. He saw a chance to add a valuable perspective to his team, and the new head coach grabbed it with both hands.

“Look, ‘the Brotherhood’ is still strong and alive and well,” Scheyer told Andy Katz on the official March Madness Youtube channel. “You know, for us, we had an opportunity to really take a fresh look, fresh perspective and, you know, talking to Jai, one, you think about the places he’s been, you know, Florida, Texas, Kentucky. Great coaches he’s been around in Coach [John Calipari]and Coach [Rick] Barnes, you know, and Coach [Shaka] Smart. I mean, to get that perspective and that experience at his age, it really doesn’t happen.”

When faced with that resume, Scheyer knew he had an oppertunity to improve his team.

“I really felt like he just fit with our staff,” the Duke head coach continued. “He’s got a great way about him. Like I said, he knows the game. He’s great with people, and he’s great with players. So we’re really excited for him to join our staff. … He’s going to be a rising star in this profession.”

If you’re feeling cynical, it’s easy to write off Scheyer’s quotes as mere public relations. It’s naive to think that he’d publicly critique the man he just hired, especially before the season has even begun. With that being said, though, we can still see the nuggets that will make Lucas an asset for the Duke Blue Devils.

As noted above, Lucas has already established himself as a strong recruiter, which meshes with Scheyer’s comments about his people skills. While it’s easy to think that the Duke brand will do most of the work when courting potential players, no program can afford to neglect its talent pipeline. With Coach K stepping back and Nolan Smith heading to Louisville, the Blue Devils needed someone to take control on the recruiting front. If his history is anything to go by, that will be Lucas.

Scheyer’s comments about experience and perspective could also be telling. Again, we’ve been spoiled by 40+ years of Coach K, but come this fall, there will be a new boss on the bench. Scheyer, for all his talent, doesn’t have the same wealth of knowledge as Krzyzewski. He hasn’t been there and done that in every single situation.

That places some extra weight on Duke’s collective brain trust. Scheyer and Amile Jefferson probably have fairly similar experiences. Chris Carrawell is the veteran of the staff, having spent plenty of time alongside Coach K. Mike Schrage brings some institutional knowledge, along with head coaching experience, while Lucas can explain how someone like John Calipari would approach a situation. Together, they’ll have to manage an unprecedented challenge.

While those in Durham have (understandably) come to think that Krzyzewski is the alpha and omega of modern coaching, there’s still value to Lucas’ outside perspective. Since he has no previous ties to Duke, he’s free to work without sentimentality; he won’t be beholden to keeping things the same simply for the sake of tradition.

On the subject of challenging tradition, that’s how we can view Jai Lucas’ hiring on the whole. While it might not have been the move Coach K would have made, it does seem to set Duke up for a newer, younger era. We’ll just have to wait and see how that pans out.

RELATED: Allen Iverson Could Have Prevented 1 of the Worst Seasons in Coach K’s Duke Career

The start of pre-season is...