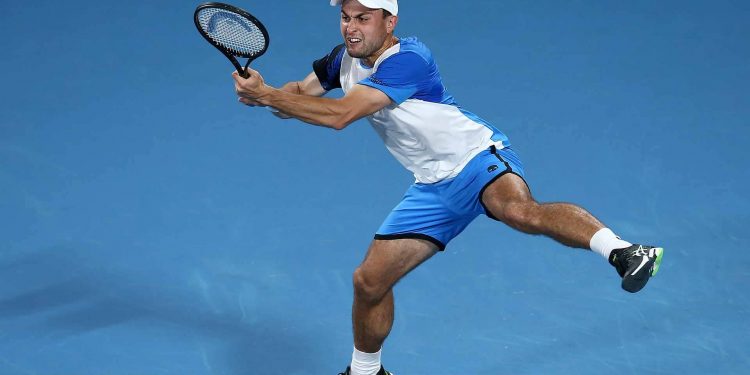 
Top seed Aslan Karatsev set a first ATP Tour meeting with Andy Murray after fighting his way to a 6-3, 6-7(13), 6-3 victory over World No. 26 Daniel Evans in the second Sydney Tennis Classic semi-final on Friday evening.

Karatsev demonstrated why he arrived in Australia as an established member of the world’s Top 20, blasting 49 winners to reach his fourth ATP Tour final. Eleven months ago, the Russian was World No. 114 before bursting onto the scene at the 2021 Australian Open by becoming the first player in the Open Era to reach the semi-finals on his Grand Slam main draw debut (l. to Djokovic).

“I like to be here”, said Karatsev when asked why he performs so well in Australia. “You arrive from winter to summer, there is nice weather and a nice atmosphere. You start the year fresh and with more energy, so I think this is the reason.”

Karatsev’s only previous meeting with Evans was a 6-4, 4-6, 6-4 win during his run to the 2021 Dubai title, and the top seed struck the ball supremely from the off in Sydney. Particularly strong off his backhand wing, he broke the Briton twice to surge to a 5-1 lead, and it was to Evans’ credit that he fought back to 3-5 as he began to move his opponent around the court more effectively. Karatsev’s power remained relentless, however, and he served out the first set, in which he won 81 per cent of points behind his first serve.

Third seed Evans was fighting to maintain a perfect record in 2022, having won all three of his singles matches at the ATP Cup last week (d. Struff, Shapovalov, Isner). He showed real grit to stay in the match, saving the only break point of the second set at 5-5. He then levelled the match in an epic tie-break, saving three match points before taking it 15/13 with his sixth set point.

The level from both players remained high even as the match stretched into a third hour, but after an exchange of breaks early in the deciding set, it was Karatsev who found a way to victory.

“It was a tough match against Evans,” said Karatsev. “He’s a guy who doesn’t give you any free points at all.”

Karatsev will look to win his third ATP Tour title on Saturday against Murray. The Russian has also triumphed in Dubai (d. Harris) and Moscow (d. Cilic) since his exploits in Melbourne last year.
“I will be prepared,” said Karatsev. “I have to rest a bit, prepare mentally and physically, and we will see tomorrow.”

Has Labour Finally Hit On A Winning Formula With Starmer’s New Top Team?

Five overlooked tech stocks poised to be the ‘household names of the future,’ according to this money manager

Five overlooked tech stocks poised to be the 'household names of the future,' according to this money manager

What are we doing?!: Senator furious on floor over elementary school shooting – CNN