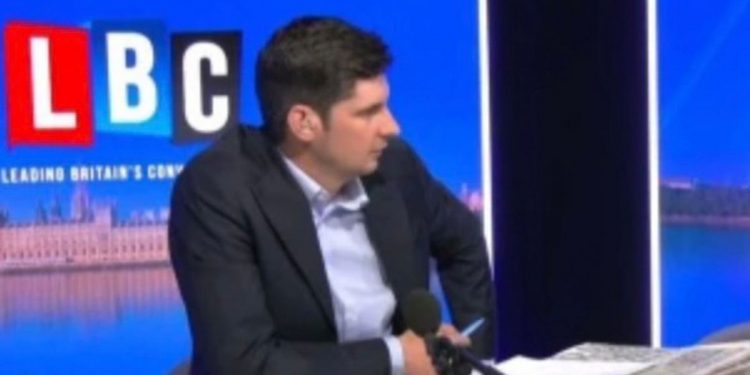 Nathan McGovern, an activist for Just Stop Oil, glued himself to an LBC microphone during an interview with presenter Tom Swarbrick

LBC radio station descended into chaos on Sunday morning when a guest glued themselves to a microphone and refused to leave the studio.

Just Stop Oil spokesperson Nathan McGovern had been chatting to presenter Tom Swarbrick when he took issue with the station’s handling of his eco-friendly message.

McGovern accused LBC of ‘not using their massive platform’ to share the dangers of climate change, while taking out a tube of glue from his pocket.

He then proceed to stick his left palm to the microphone.

Alerting listeners to what was going on in the studio, Swarbrick said: “For those of you listening wondering what the banging on the microphone is, Mr McGovern seems to have, you’ve glued yourself to the microphone? That’s fantastic.”

Explaining his course of action, McGovern told the host: “You have a massive platform, a microphone that you can use to tell people about the situation we’re in and you’re not using it.

“An ordinary person like me is having to take the microphone and tell your viewers the situation we are in.”

He added: “I’m having to take the microphone in a situation like this, and having to tell people the situation we are in, because people like you will not.”

The incident led to Swarbrick having to change studios to continue his show.

After the drama, Just Stop Oil posted a statement on social media.

“Every new oil and gas facility tightens the noose around the necks of our young people.

“If the media will not communicate their predicament they will have no choice but to take the microphone,” they insisted.

“Lesson in how to completely undermine your argument! “Ooh I’ll glue my hand to a microphone …” said one.

“Tell you what Mr glue person, if you stopped talking over people, and learnt the art of conversation and debate, you would get more people’s attention than glueing your poxy hand to a desk. Not a good representation of your cause,” added another.

While a third said the activist had raised several good points before the disruption.

The latest stunt came from activist group Just Stop Oil, who made headlines last month by bring Everton’s football match against Newcastle United to a standstill when a protester tied himself to a goalpoast.

The man known as ‘Louis’ broke onto the pitch at Goodison Park in the 57th minute wearing a T-shirt with ‘Stop Oil’ written on it.

He proceed to attach himself to the post, were he remained for eight minutes as officers tried to free him with bold cutters.

The protester was ejected from the pitch by stewards and police
(

“It’s 2022 and it’s time to look up, time to step up and not stand by. It’s time to act like it’s an emergency,” they posted on Twitter. “Report after report is telling me that my future is going to be dire, and my government is telling me not to worry and pay into a pension.

Trump news – as it happened: Biden has privately said ex-president should be prosecuted, says report