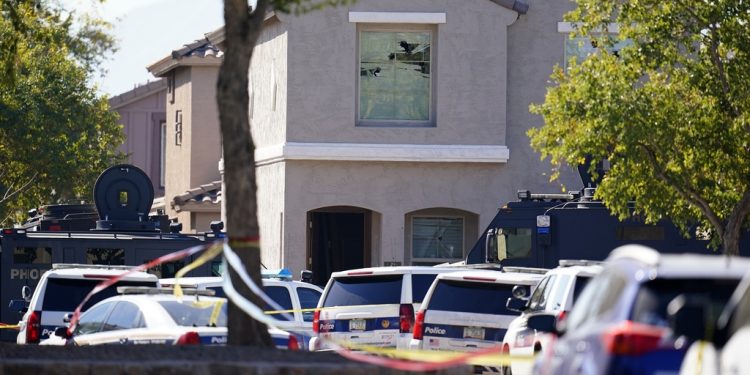 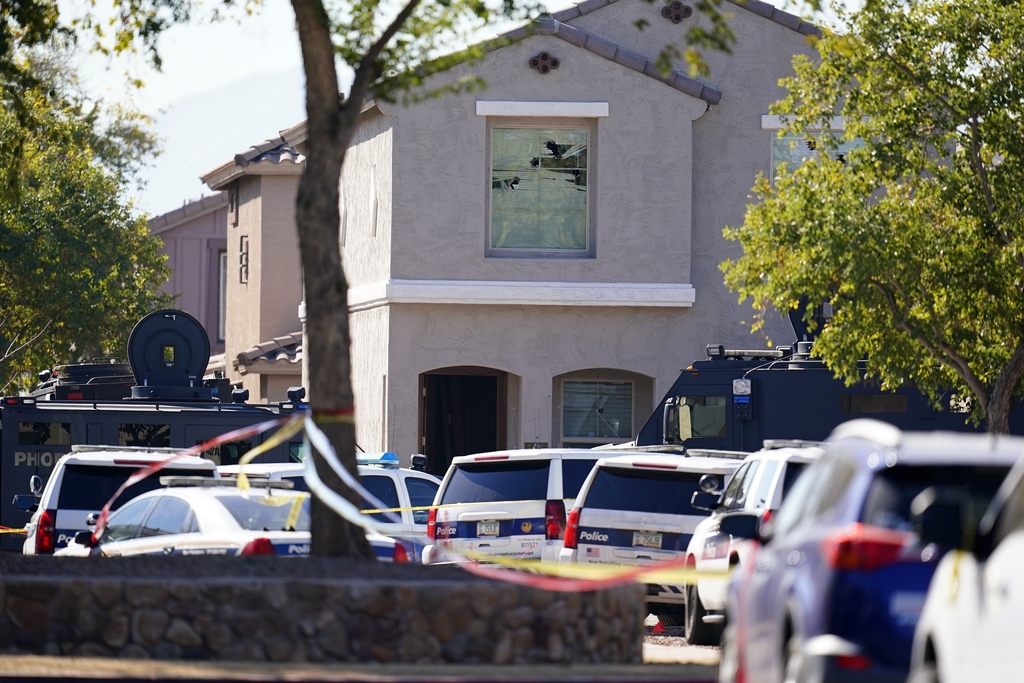 PHOENIX — A man who shot his ex-girlfriend at a Phoenix home early Friday ambushed the first officer on the scene, seriously injuring him, then opened fire on other police as they tried to rescue a baby that was left outside the door.

The woman later died. In all, five officers were shot, including four who were wounded while trying to take the baby to safety. Four more officers were injured by shrapnel or ricocheting bullets, police said.

Of the five shot directly, four remain hospitalized. All of the officers were expected to survive, and the baby girl was unharmed.

“I cannot recall an incident in city history where so many officers were injured,” Mayor Kate Gallego said at a news conference near the scene. “A baby is safe today because of our Phoenix police officers.”

The most seriously injured officer was the first to arrive at the home, around 2:15 a.m., following a report of a woman shot. He was invited inside, Phoenix police Sgt. Andy Williams said.
“As he approached the doorway, the suspect ambushed him with a gun and shot him several times,” he said. “That officer was able to get back and get away to safety.”

Video from the scene shows another man coming outside holding a baby and a satchel. The man put the satchel on the ground and then laid down the infant, wrapped in a blanket, between the satchel and the front door. He raised his hands to surrender while backing away from the house.

After that man was detained, other officers approached the doorway to get the baby girl, and the suspect fired more shots. The police returned fire, which then led the suspect to barricade himself. Eight of the officers were wounded by bullets or shrapnel in that exchange, Williams said.

Police were able to get the baby to safety as a SWAT unit took over.

The suspect remained barricaded for several hours and was later found dead from a gunshot wound inside the home.

They also found the suspect’s ex-girlfriend, who had been shot and was critically injured. She died hours later, police said. Williams said the baby was believed to be the woman and suspect’s child. She is now in state custody.

The man who brought the baby outside suffered non-life-threatening injuries. Williams said he’s a family member and is cooperating with police.

“No information suggests that he’s part of the ambush, but it’s an ongoing investigation,” Williams said.

Police identified the gunman as 36-year-old Morris Jones and said they were still trying to learn about the circumstances preceding the incident. Detectives were gathering evidence and processing the scene Friday morning.

Williams declined to say whether Morris has a criminal record or if police had been called to the home before.

“This is just one more example of the dangers that officers face every day keeping us and our community safe,” Police Chief Jeri Williams said at an early morning news conference. “If I seem upset, I am. This is senseless. It does not need to happen and it continues to happen over and over again.”

Chris Grollnek, an active shooter expert, told The Associated Press on Friday that it’s important to know how the incident was initially reported. Was it a 911 call from the woman pleading for help? A neighbor reporting gunfire and screaming?

The immediate information will determine how the first officers respond as they get to the scene, he said.

Traditionally, a barricaded suspect buys the police time to set up a perimeter and call a SWAT team, which could take 20 minutes to arrive. But if someone is injured inside, “the human factor takes over,” Grollnek said. “I’m the first one there, I’m going in.”

Both Heal and Grollnek described firing on officers who are trying to save a baby as “evil.” They said police protocols simply cannot cover such a scenario.

“Hopefully it doesn’t happen often enough that we’ll ever have a protocol for it,” Heal said.

He added he cannot imagine a situation where the officers would have left the baby exposed because it was too dangerous for them to rescue the child.

“The moral factors far exceed the physical risk,” he said.

The middle-class neighborhood in southwest Phoenix where the shooting occurred has newly constructed stucco houses tightly packed together and sits next to large shipping and fulfillment facilities for businesses. The home had its second-story windows shot out.

Frank DeAguilar, its owner, said the residence is a rental and he didn’t know anything about the people living there, including their names. He said a property management firm handles the details.

Ethereum v Binance Coin: Why ETH could outperform BNB in 2022