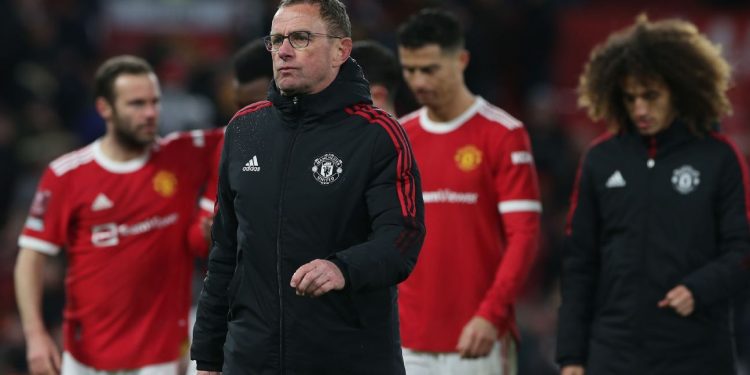 
MANCHESTER, England — There will be no FA Cup triumph to paper over the cracks for Manchester United this season. Unless they win the Champions League — and that seems as likely right now as Ralf Rangnick’s team taking a midseason break on the moon — the club’s trophy drought will stretch to five years after Middlesbrough’s 8-7 penalty shootout win at Old Trafford ended United’s only realistic hopes of silverware this season.

Not since the 1980s have United gone so long without winning a trophy, but the club and team are in such a state of flux that only the most optimistic supporter would claim they could see an end in sight to the dismal run of failure. This is a team built of deadwood and driftwood — players past their best and others who are performing so far below their ability that they risk wasting the talent that initially made them worthy of wearing the United shirt.

United are already out of the title race and their Carabao Cup involvement lasted just one game, with West Ham United eliminating them with a 1-0 win at Old Trafford in round three last September. This defeat against Championship side Middlesbrough ended their FA Cup involvement at the fourth-round stage and ensured a first home defeat against lower-league opposition in this competition since losing to League One Leeds United in 2010.

So a season that started with such optimism — following the signings of Cristiano Ronaldo, Raphael Varane and Jadon Sancho — is only heading for the rocks, and you wouldn’t back many of Rangnick’s squad to turn the ship around between now and the end of the season.

Against Middlesbrough, United will argue that they suffered from a misinterpretation of the handball rule when Chris Wilder’s team cancelled out Sancho’s first-half goal to equalise when Duncan Watmore’s left hand controlled the ball before it fell to midfielder Matt Crooks at near post to score. Watmore’s involvement was regarded by the officials as accidental rather than deliberate and, because the ball did not go directly into the net as a result of it, Crooks’ goal was allowed to stand.

“We conceded a goal which I don’t understand why it stood,” United interim manager Rangnick said. “He controlled it with his hand.”

Even Boro manager Wilder said he was expecting the goal to be ruled out.

“I thought straight away it was handball,” Wilder said. “I thought it would be chalked out and delighted it wasn’t.”

But as confusing as the incident may have been, United had already missed enough chances to win the game convincingly. Ronaldo sent a 20th-minute penalty wide and Sancho and Marcus Rashford both missed clear opportunities to score, so Middlesbrough’s goal ultimately proved so decisive because of United’s earlier failings. Rangnick’s team wasted more chances as the game wore on, too, so United only had themselves to blame for their FA Cup exit following a seventh defeat in their past eight shootouts, which was confirmed when Anthony Elanga sent his spot kick over the crossbar.

That United are in a mess right now is no revelation. The dismissal of manager Ole Gunnar Solskjaer in November came after a run of four defeats in five Premier League games, including a 5-0 home defeat against Liverpool, so the rot had set in long before Rangnick was charged with a rescue mission in December.

Although the German tactician has halted the run of defeats and offloaded underperforming fringe players such as Donny van de Beek and Anthony Martial, he has so far been unable to find a way to infuse his players with confidence and belief. When United have won under Rangnick, it has been unconvincing, and when they have drawn or lost, the performances have been abject and soporific.

This is a team with huge talent, especially in the attacking areas of the pitch, but they are consistently flat and unadventurous. Ronaldo, Rashford and Sancho are all struggling for form, while Bruno Fernandes has been searching for his best performances for more than a year now.

With an interim manager, though, the players know that their boss is only passing through and lacks the authority to demand better. Rangnick is dealing with a group of players who look and play as though they want nothing more than for the season to end and a new, permanent manager to come in and give them all some much needed clarity and direction.

It is a squad lacking character and personality, but stocked with players harbouring big reputations and failing to justify them.

When Juan Mata came on as second-half substitute, it ensured that the 11 players on the pitch had been signed by no fewer than five different managers, dating back to Sir Alex Ferguson signing Phil Jones in 2011. That is a big part of the problem: There are too many players who should have been moved on years ago and too many who have been signed for a quick hit of headline-making publicity.

There is no sense of a plan or consistency and that’s why defeats like this one, which ended hopes of a major trophy, have become the norm at United in recent years.

Will it ever end? It doesn’t look like it at the moment.