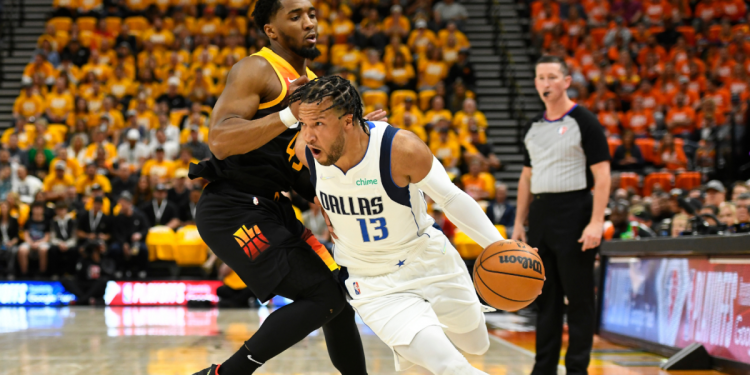 With Luka Doncic sidelined by a calf injury, the Dallas Mavericks needed their supporting cast to step up in their first-round series with the Utah Jazz. In Game 2 on Monday night, Jalen Brunson did that and more, pouring in a career-high 41 points to lead the Mavs to a massive win that tied the series at 1-1.

Brunson carried that momentum into Game 3 on Thursday night in Salt Lake City, as he finished with 31 points and five assists to lead the Mavericks to a 126-118 win and a 2-1 series lead. Unfortunately, his night wasn’t perfect. In the middle of the second quarter, it took a painful turn.

With five minutes to play in the quarter, the Jazz brought the ball down the floor and Mike Conley ran a pick-and-roll with Rudy Gobert. After getting some space, Conley launched a 3 that caught nothing but the bottom of the net. It seemed like a rather normal play, and should have been. But when the ball was in the air, Brunson turned to box out Royce O’Neale, who came charging in and sent Brunson sprawling with a hard hit to the back.

Here’s a replay of the incident from the overhead angle:

Brunson stayed down for a brief period and was grabbing at his lower back once he eventually got to his feet. He initially tried to stay in the game, but was too hobbled and committed a foul to stop play. He also got hit with a technical foul for complaining that there was nothing called on O’Neale.

“Royce just elbowed me in the back and that’s that,” Brunson said. “I said what I have to say. It’s over with. Everything feels good with a win.”

Once Brunson checked out of the game he went straight to the locker room for further evaluation. Thankfully he was able to return after the break, and apparently escaped any sort of serious injury. That’s great news for the Mavericks, as they cannot afford to lose another key contributor.