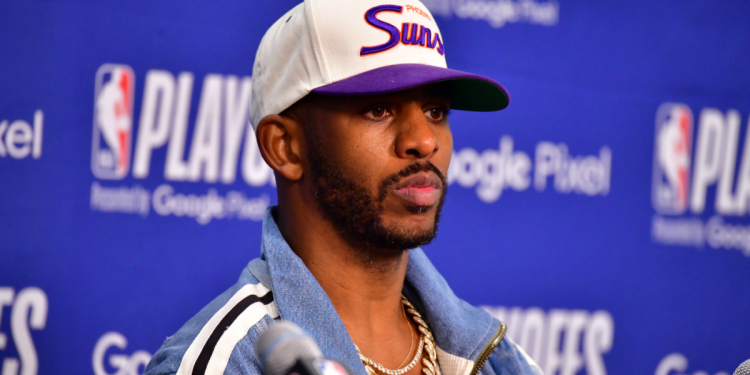 The relationship between fans and players has been a major point of discussion this postseason. Both Draymond Green and Kyrie Irving have been fined for giving road fans the middle finger in these playoffs alone. On Sunday, Chris Paul and his family dealt with a situation in Dallas.

A fan in Dallas was ejected from Game 4 of their second-round series between Paul’s Phoenix Suns and the Mavericks, and as he was escorted out, Paul was seen on video saying “I’ll see you later” to him.

Dave McMenamin reported that a Dallas fan put his hands on Paul’s mother and that his wife was also pushed. Paul’s children were also in attendance, and according to McMenamin’s source, “they felt very unsafe.” Paul echoed those sentiments on Twitter after the game. “Wanna fine players for saying stuff to the fans but the fans can put they hands on our families….f— that!!” Paul wrote.

The Mavericks issued a statement Monday afternoon explaining the situation that took place, saying that two fans attempted to give “unwanted hugs” to members of Paul’s family. The Mavericks also said those fans will be banned until 2023.

“American Airlines Center and Dallas Mavericks security and executives have concluded the investigation in to the incident involving the Paul family. Two unruly fans attempted to give unwanted hugs and have conversations with members of the Paul family on the public concourse of American Airlines Center. AAC security responded immediately once notified by the family and the fans were swiftly ejected from the game. The fans involved in the incident will not be allowed to return to the arena until 2023.”

Paul is the former president of the NBA Player’s Association, though his term has now concluded. How exactly the league and the union could go about fixing these issues is unclear, but the past few seasons have seen a number of high-profile incidents of fan misbehavior. A fan in Boston threw a water bottle at Irving in the 2021 postseason.

Others have been accused of racist speech toward players. It has become one of the bigger problems in all of basketball, and while fans are getting ejected for it, players often face discipline for merely responding. Paul is clearly frustrated with that state of affairs, and if the league won’t give players room to respond, it needs to do a better job of preventing these incidents from ever occurring.