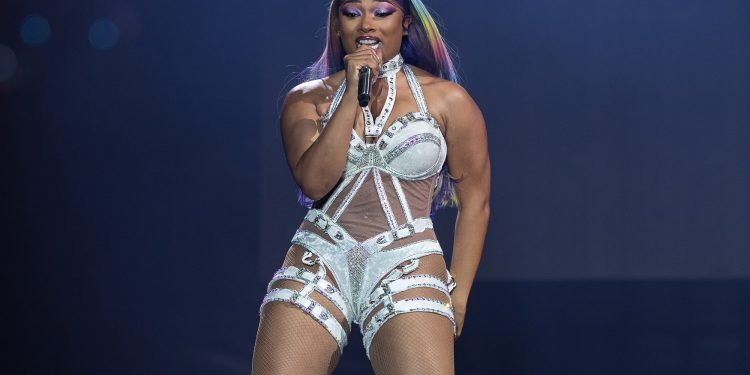 
Megan Thee Stallion‘s record label has countersued the rapper after she filed a lawsuit claiming that they refused to acknowledge her recent ‘Something For Thee Hotties’ record as an album.

Megan – whose real name is Megan Pete – filed a complaint in Harris County District Court last month, “seeking a declaration that her album, ‘Something for Thee Hotties’ constituted an ‘Album’ as defined in the parties’ recording agreement”.

The record was released on October 29, 2021. According to the complaint, 1501 informed the rapper on January 5, over two months after the release of ‘Something For Thee Hotties’, that it did not consider it an “album” under her recording contract.

But the label has now countersued saying the record was nothing more than a compilation of old, previously-released material.

According to court documents, obtained by Rolling Stone, the label says the record is “made up of 21 recordings and includes spoken interlude recordings on which MTS does not appear as well as several previously-released recordings.”

The label also claims that the rapper only appears on 29 minutes of new recordings and it claims that her contract dictates that “she must include at least 12 new master recordings of her studio performances of previously unreleased musical compositions” to get credit for an album under contract.

Megan’s attorneys previously stated that 1501’s only requirement for something to be considered an “album” in their agreement with the rapper is that a release is over 45 minutes in length.

Her attorney Brad Hancock has today (March 21) responded to 1501’s lawsuit, telling TMZ: “This is yet another absurd attempt by 1501 to disregard Megan’s album and squeeze more money and more free work out of her for as long as possible. We will ask the court to protect Megan from this type of abuse.”

First the man over my label said I don’t make him any money … now he counter suing trying to keep me on his label because he wants to make more money lol if I ain’t making you no money why not just drop me?

This evening, the rapper also took to Twitter to make a series of comments.

“First the man over my label said I don’t make him any money … now he counter suing trying to keep me on his label because he wants to make more money lol if I ain’t making you no money why not just drop me?” she wrote.

“I choose not to say nothing back abt court and address shit online but im getting tired of being painted the BAD GUY 2/47 the last girl on 1501 mad at this man too!”