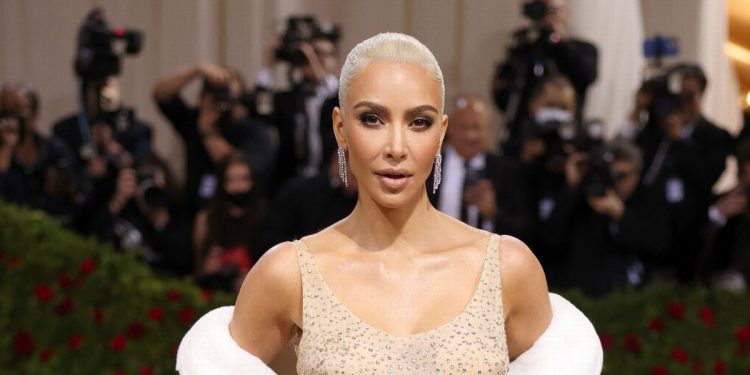 The reality star, 41, wore the infamous outfit wore by the actress 60 years ago to sing happy birthday to then-president John F Kennedy on his 45th birthday.

And she admitted she had to lose 16 pounds in order to fit into what has been dubbed the “world’s most expensive dress” worth a reported $4.8 million.

In order to fully do the stunning outfit justice, the SKIMS founder even bleached her normally dark locks blonde and matched it with a dazzling pair of diamond earrings.

She made her grand entrance to the event at the Metropolitan Museum of Art in New York and certainly didn’t disappoint those eagerly awaiting her appearance.

While many were expecting an extravagant entrance alongside Saturday Night Live star Pete, 28, few would have expected what was to come.

Her dramatic transformation was breathtaking and fans quickly headed to social media to shower her with praise.

Another commented: “this dress is stunning on Kim Kardashian #kimkardashian #metgala #MetGala2022.”

A third wrote: “You can say whatever you want about Kim Kardashian but she CAN DRESS. stunning #MetGala.”

And a fourth added: “Kim Kardashian is a vision in that Marilyn Monroe gown, absolutely stunning #MetGala #MetGala2022.”

But not everyone was impressed, with one user slamming her attempt to mirror Marilyn. They wrote: “Kim Kardashian’s attempt to mirror the divine Marilyn Monroe predictably falls flat … even wearing Marilyn’s actual dress!!!

“A cheap peroxide wig and spackle cannot mask her lack of Marilyn’s true appeal and genuineness!!!”

Pete, while overshadowed by his partner, looked dapper as he donned a stylish slim-fit black suit and black tie combo.

He completed the look with a pair of black shades as he joined arm-in-arm on the red carpet.

The comic was happy to take a step back from the limelight though and praised his belle for how good she looked to the show’s hosts, before joking she stopped him wearing a cap.

White Sox, Cubs to meet at Wrigley Field this week

White Sox, Cubs to meet at Wrigley Field this week