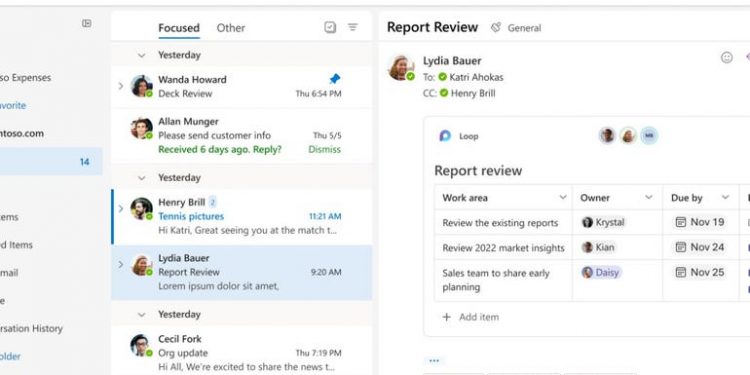 Mary Jo Foley has covered the tech industry for 30 years for a variety of publications, including ZDNet, eWeek, and Baseline. She is the author of Microsoft 2.

Microsoft has started rolling out the new Outlook for Windows client to testers in the Office Insiders Beta Channel. Microsoft announced on May 17 availability of the new Outlook for those with Microsoft 365/Office 365 business and education accounts — a week after the new “One Outlook”/Project Monarch client leaked.

Company officials said only testers who are paid customers, have their commercial or education mailbox as their default sender account in classic Outlook for Windows, and are in Beta Channel will see the “Try the new Outlook” toggle in the top right corner of the Outlook for Windows app.

The new client, as expected, looks and feels a lot like the current Outlook for the Web/Outlook.com clients. It also has new features like message reminders; a calendar board; a single view for email, calendar, and to-do; and support for a test version of Loop components. The new Outlook client also allows users to quickly attach files and documents that are stored to the cloud in their email messages by using the “@thenameofthefile” convention to see options.

Loop components are the renamed and updated Fluid Framework components — tables, notes, tasks, or even a customer-sales record in Dynamics 365 — that can be embedded in chats, emails, meetings, documents, or pages. The calendar board is the evolution of the technology that was formerly known as “Outlook Spaces” and codenamed Project Moca.

Many of the expected new Outlook features are still missing in this preview build; multi-account and offline support are “in development.” Support for Outlook.com, Gmail, iCloud, and other iMAP accounts are all listed as “in development,” along with existing Outlook features like Quick Steps and Search Folders. POP support is listed as a feature under investigation, while U.S. Government Cloud, Outlook data (.pst) files, and Folder reordering are listed as planned.

The new Outlook, which has been known during development as “Project Monarch” and “One Outlook,” is meant to unify the Windows, Web, and Mac codebases for Outlook. This new version of Outlook has been in testing internally at Microsoft for months.

Earlier this year, my contacts said Microsoft would announce the new Outlook this spring and would get a test version of it to Windows Insiders in the Dev and Beta channels by late March or early April 2022.

Update (May 20): It’s good to see Microsoft is as confused about all the things called “Outlook” as the rest of us. Microsoft has removed the reference it made to “the new Outlook for Mac” preview from its blog post — which makes sense, given that particular preview was not related to Monarch/One Outlook. Officials addd a new line stating: “This post was edited after publication to clarify that the new Outlook for Windows is designed to bring consistency across the Windows and Web codebases.”

However, the plan for One Outlook is to unify the codebase of Windows, Web and Mac versions of Outlook and there is a Mac reference in the beta Windows client. I am thinking the plan is still, at some point, to release a Mac Outlook client that uses the same codebase as Windows and the Web. I guess we will see…