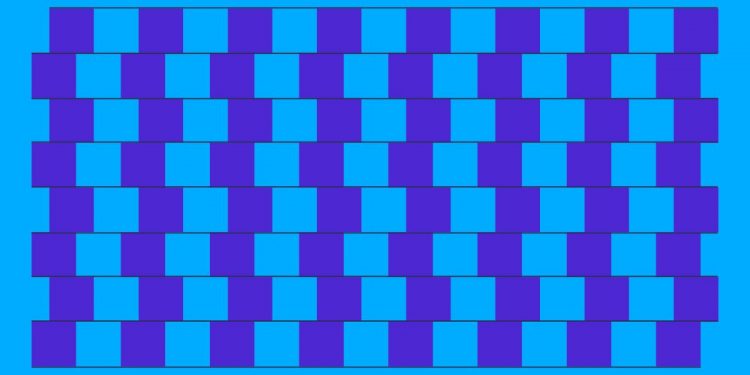 The mind-boggling puzzles often deceive the mind and could leave people scratching their head for a while.

Now the latest image to confuse online users involves a blue image which features some lines.

The companies also put Brits to the test as people polled on what they could see within the image.

So the big question is – do the lines appear straight to you?

The lines are the focal point of this optical illusion as they appear to be on an angle when in fact, they are completely straight.

Almost half of those polled (45%) said the lines were on an angle compared to the other half who claimed they were straight.

Bhavin explained: “This optical effect is even more striking if the colours are black and white.

“The difference in contrast of the larger squares (dark vs light blue) affects the appearance of the horizontal line between each row.”

Different neurons respond to light and dark differently which impacts the line in between.

The mind-bending snap shows two people hugging on a beach as many are wondering what’s actually going on.

In the image, titled “This hurts my brain”, the optical illusion has since been viewed 2million times when it was shared in 2016.

And it seems as though all those years, people are still left divided over the photo.

Vice president’s staffer, others test positive for the coronavirus