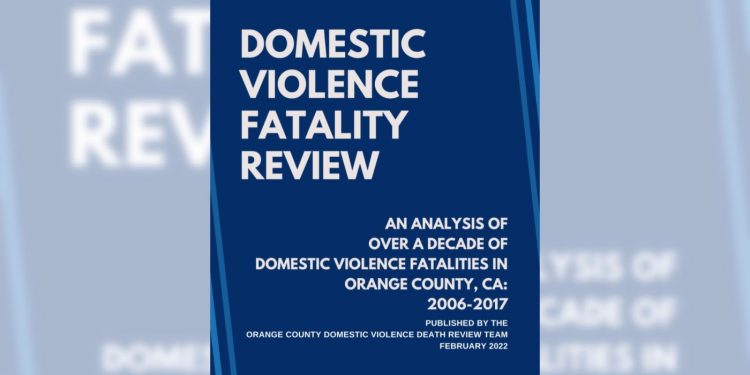 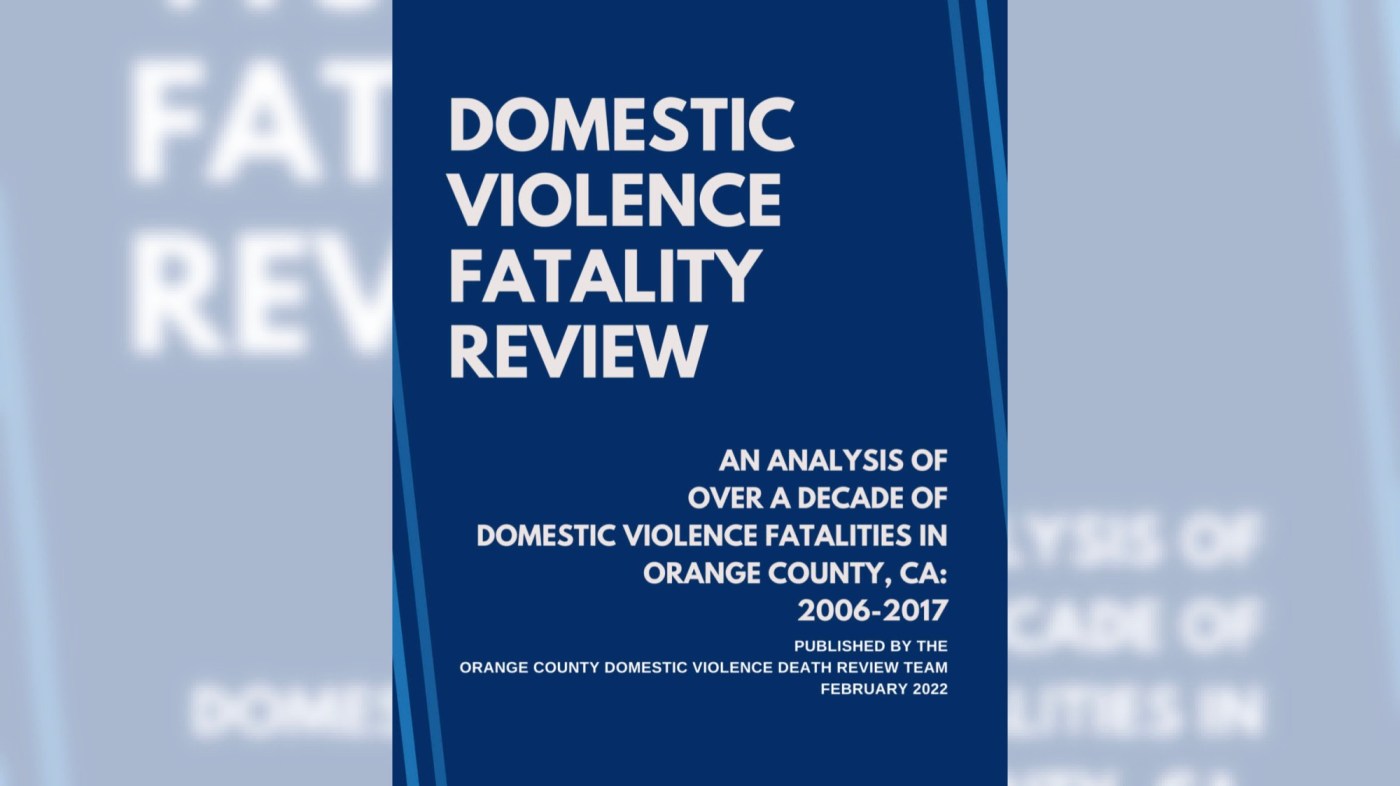 Guns in the home, drug use, a sudden layoff – the presence of any or all of these can be signals that a troubled domestic relationship could morph from angry and sometimes violent to fatal.

So says a long-term investigation into domestic violence slated to be released Wednesday, Feb. 16 at UC Irvine by a group of Orange County lawyers, coroner officials, service providers and police leaders.

Other triggers, ranging from broad economic slumps such as the Great Recession, to individual divorce and child custody proceedings, also can be factors when a domestic partnership turns deadly, according to the report.

Though domestic violence has long been viewed as a social problem, writers of the “Domestic Violence Fatality Review” say their study offers important new information and is the first local deep dive into the most extreme cases of abuse; people who were killed or took their own lives as a result of violence involving an intimate partner.

By looking backward at each case and tracking how the participants previously connected with (or didn’t connect with) official channels – including courts, health care providers and domestic abuse agencies – the researchers looked for patterns that might prove useful in reducing domestic violence and preventing future deaths.

“This (report) starts a conversation … that hopefully gets to a deeper understanding of the issue,” said Maricela Rios-Faust, co-director of the research project and chief executive of Human Options, an Orange County organization that helps victims of domestic violence.

“One of the most challenging things about domestic violence is the nuance,” Rios-Faust added. “Once you learn that there is nuance, and you learn how to listen, you hear stories in a different light.”

In all, the 10-member group behind the project – the Orange County Domestic Violence Death Review Team – tracked 113 deaths connected to 74 criminal cases that took place from 2006 to 2017 in which an intimate partner wound up killing one or more people. The time period was limited to cases that have been formally adjudicated in court and could be unambiguously labeled as domestic violence. The fatality count included people involved in a case who were related to one of the partners and people – often the perpetrator – who died by suicide.

But as sobering as the local numbers are, national data suggests the report looked at only a fraction of the domestic partner killings that took place in Orange County during the period in question. Overall, about 1 in 4 women, and 1 in 7 men, experience domestic abuse during their lifetimes, and many never talk about it.

In the local study, 88% of the victims identified as female and 12% as male. But the overall death count included 48 men, roughly three-quarters of whom committed suicide after killing or injuring a partner. Those figures also mirror national statistics.

Though advocates for decades have been raising awareness about domestic violence, and generations have now grown up hearing that abuse victims aren’t at fault, Rios-Faust and others connected to the report say long-standing social stigmas continue to hold sway. Those stigmas, they add, still make people reluctant to reveal the threat they face to anybody who might protect them. In all, about one-third of domestic abuse victims never report it.

That silence might be a key in abuse cases that turn deadly. In the cases studied for the Orange County report, less than half (46%) of the people killed by their partner were in relationships previously known by authorities to have a history of domestic violence, and just 9% of the cases involved legal restraining orders.

“Shame is the key messaging from the abuser,” Rios-Faust said. “They tell their victims ‘It’s your fault’ or ‘If you just kept the house clean’ or ‘Keep the kids quiet’ or whatever, then the (violence) wouldn’t happen.

“And, in an attempt to help and support the victim, we often ask, ‘Why does she stay?” Rios-Faust added.

“But when we do that we are sort of re-enforcing that message of shame. Hopefully, that’s something we can change.”

Jorge Cisneros, chief of police in Anaheim and a member of the group behind the study, suggested that reluctance to talk about abuse can combine with another risk factor – the presence of a gun in the home – to turn a troubled relationship into a lethal one. Nearly three-quarters (72%) of the deaths studied in the local report involved firearms, a figure that matches up with national data.

“We don’t always have the ability to stop these types of crimes, which mostly happen behind walls and closed doors,” said Cisneros, who recently presented the report to a meeting of Orange County police chiefs and Sheriff’s Department leaders.

Guns can escalate violence, and Cisneros said a 2018 California law that makes it possible to prevent people convicted of even misdemeanor domestic assault from ever legally owning a gun suggests “we are thinking and moving in the right direction.”

(The report, however, suggested enforcement of that law has been lax. In 2019, the state estimated that at least 5,750 people in California who could have been barred from gun ownership because of domestic abuse crimes still possessed a firearm.)

The report referenced a 2003 national study that found the presence of a gun in the home increased the odds of a domestic violence death by 500%. And, more plainly, the report found that a domestic partner or relative was shot to death in Orange County at least once every six weeks during the 10-year stretch included in the study.

But the report also found another risk factor beyond guns – previous acts of domestic abuse that involved choking.

About 1 in 10 of the fatalities in the Orange County study were victims of strangulation, and most of those people had been choked in a previous incident prior to their deaths. The report said national data show that domestic violence cases that involve choking increase the odds of a fatality, later, by 750%.

Other risk factors include mental illness, drug abuse and job insecurity. Though the numbers involved in the local report aren’t big enough to draw statistically valid connections, the report did show a jump in domestic killings during the years just after the Great Recession, which was particularly difficult in Orange County because of the region’s connections to the mortgage industry.

The pandemic – which wasn’t included in the report – is another factor that has almost certainly sparked a jump in domestic killings, advocates said.

“About six months into the pandemic, we could see that tensions were high,” said Rios-Faust, whose agency runs an emergency shelter for victims of domestic abuse. “And about 50% of the survivors in our shelter were describing strangulation as a method of abuse. That jump, to me, is an indicator that the problem was particularly bad.”

Anaheim views domestic violence as a priority, said Cisneros, the city’s police chief. The city and the police department work together to offer wrap-around services for victims, meaning people can seek protection, counseling and legal help without seeing multiple agencies.

In theory, that kind of aid could diffuse domestic violence cases before they become fatalities.

Jane Stoever, a co-chair of the report and a law professor at UC Irvine who leads the school’s Domestic Violence Clinic, said cases highlighted in the study illustrate ways courts also can become better at preventing domestic killings.

“There were known points for earlier intervention,” Stoever said.

In divorce proceedings and custody hearings, she said, abusers can feel “they’re on the verge of losing everything,” a belief that can ramp up the stakes and the violence.

“Judges have the opportunity to send the message to everybody in a case that this is a time of danger,” Stoever said. “It’s public health messaging.”

Stoever and Rios-Faust both said the report suggests, broadly, that domestic violence is a public health issue. And, toward that end, Stoever said people should be taught earlier – in their early teens – about how to avoid abusive relationships and get away from abusers. If domestic violence is viewed as a health crisis, not just a legal or social problem, she said intervention can become more routine.

“We all have a responsibility in this,” Stoever said. “And we need to normalize these conversations.”

Russia-Ukraine War Would Be Artillery and Missile Showdown