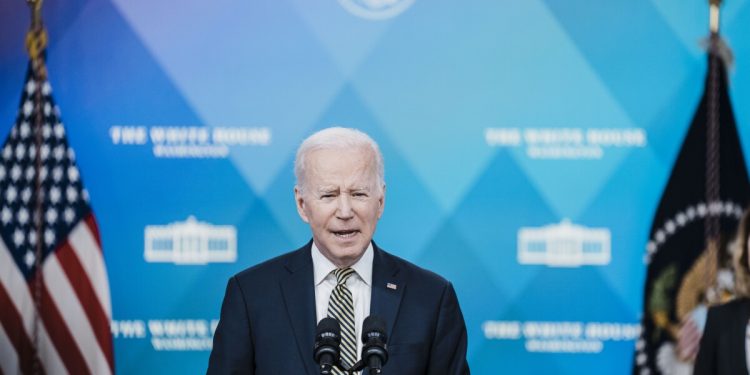 When President Biden walked maskless into the House chamber for his first State of the Union earlier this month, the White House hoped it would signal the nation had turned a corner on a pandemic that overwhelmed hospitals and killed nearly 1 million nationwide.

Even so, Biden did not claim victory, as he did last summer only to see cases and hospitalizations spike as the U.S. was hammered by the Delta and Omicron variants of the coronavirus. “I cannot promise a new variant won’t come,” Biden said. “But I can promise you we’ll do everything within our power to be ready if it does.”

That balancing act highlights how Biden remains caught between a population eager to go back to normal and the realities of a pandemic that does not appear to be easing up. Not two weeks after his maskless address to Congress, a surge in infections is occurring around the world. In China, a spike in cases, attributed to the extremely contagious Omicron variant, has prompted massive shutdowns. In Europe, cases are also on the rise, an ominous sign that yet another surge in infections might be around the corner in the U.S.

Those close to the president have also been catching the virus. Doug Emhoff, the husband of Vice President Kamala Harris, tested positive on Tuesday. Ireland’s prime minister, Micheal Martin, tested positive a day later — after attending a gala with U.S. lawmakers, including House Speaker Nancy Pelosi (D-San Francisco), who sat maskless beside him.

Those cases and the rise in infections around the world are coming as local and state jurisdictions, controlled by both Democrats and Republicans, have scaled back pandemic-related restrictions in the face of bipartisan exhaustion from such measures. Public health experts say the next wave could not come at a worse time, and there isn’t much the Biden administration can do to mitigate it under current political circumstances.

It is likely that the United States will see a rise in infections within weeks, said Dr. Lisa Maragakis, senior director of infection prevention at the Johns Hopkins Health System.

The primary reason for that potential increase is a “dramatic shift in our behavior,” Maragakis said. After hospitalizations waned earlier this year, government officials were “very enthusiastic to rush forward with taking away restrictions. That in and of itself sets up the conditions for the next surge, unfortunately.”

The White House also appears to be adjusting its strategies and personnel in seeking to combat the virus in light of the public’s eagerness to move on.

This week, the administration announced that it would replace its coronavirus response coordinator, Jeff Zients, with Dr. Ashish K. Jha, the dean of the School of Public Health at Brown University. Jha frequently appears on cable news shows and tweets prolifically about the pandemic. Biden in a statement said Jha is recognized for his “wise and calming public presence” and that he was “perfect for the job” of guiding the nation into the next phase of the pandemic.

While still touting the need to get vaccinated — 75% of adults are fully vaccinated, according to federal statistics — the Biden administration is also seeking more than $15 billion from Congress to bolster the nation’s testing capacity and to make sure uninsured Americans have access to free treatments. The spending bill has stalled in Congress, thanks to Senate Republicans who earlier this month passed a resolution to terminate the nation’s emergency declaration.

White House Press Secretary Jen Psaki said the president knows how to manage the pandemic. But if Congress does not approve new spending, the administration “is at great risk of running out of money to do exactly that,” she said.

“Just because COVID isn’t disrupting some of our lives in certain communities as much as it was a few weeks ago, it doesn’t mean it’s gone,” Psaki said. “It’s not gone.”

Health experts say the government may be approaching the point where it focuses more on how the virus is affecting hospitals instead of overall infections.

American vaccines have proved a formidable defense against severe illness. Because the virus will likely continue to spread throughout the world, “it could be argued that at this point in the pandemic, we shouldn’t worry about infection,” said Dr. Leana Wen, a public health professor at George Washington University. Instead, she said, the nation could be keeping close tabs on when severe illness “threatens to overwhelm our healthcare system.”

It will be challenging for the Biden administration to do this, however, without additional funding to boost the stockpile of treatments, vaccines and tests, Wen said.

“The window for preparedness and preventing is before we have another crisis,” she said. “We have tools that we did not have before in fighting COVID. We can allow people to return to normalcy and protect our healthcare system from being overwhelmed again.”

How the virus plays out in the coming months will likely have political implications for Biden and his party, especially as polls show that voters are frustrated with the pandemic and inflation, and they usually take out their anger on the party in power. Democrats narrowly control both chambers of Congress and face long odds of retaining them as Biden’s approval rating has not substantially risen since January.

A March 17 poll conducted by Monmouth University shows that just 39% of Americans approve of Biden’s job performance, while 54% disapprove. Biden also receives mixed marks on how he has handled the pandemic.

Steve Israel, former New York representative and former chair of the Democratic Congressional Campaign Committee, said that for Biden and Democrats to stand any chance in November, they must convince voters that COVID-19 is substantially behind them and people have to “feel in their bones that the economy is getting better.”

“The problem is that there is no way of predicting or building a political strategy that manages those external events,” he said.

TikTok star Issey Moloney talks getting her own place at 17

TikTok star Issey Moloney talks getting her own place at 17