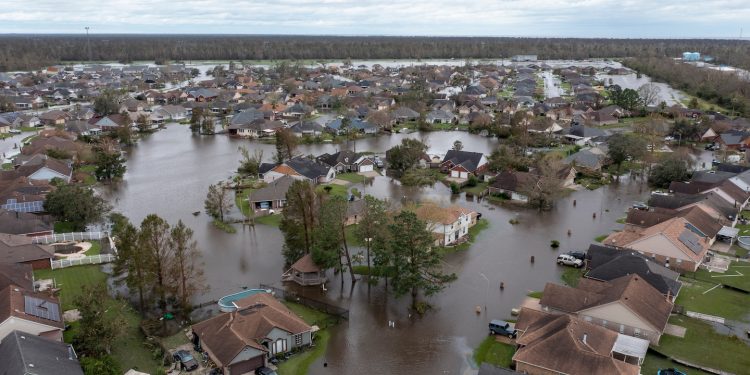 The siege of active Atlantic hurricane seasons will continue for yet another year, the National Oceanic and Atmospheric Administration predicted Tuesday. In its annual seasonal outlook, the agency forecast the seventh straight above-normal Atlantic season, with 14 to 21 named storms — compared with 14 in an average year — and three to six major hurricanes, rated Category 3 or higher.

Major hurricanes are of particular concern, as they tend to rapidly intensify, or reach 35 mph or more in wind strength in 24 hours — leaving coastal residents with little time to prepare. These major storms are responsible for the overwhelming majority of damage because of wind and ocean surge, the rise of water above normally dry land at the coast.

Scientists have observed an increase in rapidly intensifying hurricanes over the past few decades, linked to warming ocean waters from human-caused climate change.

NOAA’s outlook for another busy season follows a devastating period of heightened storm activity in the Atlantic. The 2021 season produced 21 named storms, the third most on record, exhausting all of the names of the National Hurricane Center’s conventional naming list. In 2020, a record 30 named storms formed. The two seasons combined produced the most landfalling storms on record in the United States.

Every year since 2016 has generated above-average activity in the Atlantic, with five Category 5 storms roaming the basin over that period. A seemingly relentless parade of major hurricanes — including Harvey, Irma, Michael, Laura, Zeta and Ida — lashed the beleaguered Gulf Coast during the six-year window.

The effects of Hurricane Ida last year were so severe — from the Gulf Coast to the Northeast — that the World Meteorological Organization retired it from the rotating list of hurricane names. The storm caused 96 deaths as it tracked from Louisiana to Connecticut and was blamed for $75 billion of damage, the fifth-costliest hurricane on record in the United States.

Ida, which caused catastrophic flooding in the Northeast — including New York City — demonstrated how tropical systems can inundate communities hundreds of miles from where they first come ashore. Inland flooding has become the leading cause of fatalities from tropical weather systems in recent years. Scientists have also found human-caused climate change is intensifying heavy rainfall in these tropical systems.

NOAA released its outlook at a news conference in New York, commemorating 10 years since Superstorm Sandy ravaged the region in 2012. Sandy, blamed for $80 billion in damage, is listed as the fourth-costliest tropical system on record.

Sandy was transitioning from a hurricane to a “post tropical cyclone” when it slammed the Northeast with a massive storm surge, torrential rain and huge swath of damaging winds.

“As we saw from Sandy, it doesn’t even have to be a hurricane to cause such devastation to communities,” said Christina Farrell, New York City emergency management first deputy commissioner.

NOAA’s forecast and a trend toward better accuracy

Hurricane outlooks made in the spring have shown considerable improvement over the past decade after not exhibiting much accuracy from the 1980s through about 2013, according to researchers at Colorado State University. Here are the numbers from NOAA’s outlook:

NOAA’s outlook echoes those made by several research institutions and private companies. Colorado State University, for example, is predicting 19 named storms, with a 71 percent likelihood that the United States will be hit by a major hurricane. Similarly, AccuWeather, the private forecast company based in State College, is calling for 16 to 20 named storms.

While seasonal hurricane forecasts have improved, predictions of storms once they form have made even greater strides. The National Hurricane Center’s track forecasts have steadily improved, and its average storm intensity forecast error is now 40 percent less than it was in 2000.

“NOAA will triple operational supercomputing capacity this summer,” Spinrad said at Tuesday’s news conference. “This upgrade will allow for higher-resolution earth models that can handle larger ensembles of models with more numerous calculations, more advanced physical considerations and more advanced ability to assimilate the data collected out in the storm.”

To improve its predictions, NOAA is also operating five Saildrones — or uncrewed vehicles on the ocean’s surface — to probe conditions; extending forecasts for extreme rainfall potential three to five days into the future; and introducing a product to pinpoint where the peak surge will occur when a storm is approaching the coast.

Scientists drove a robotic surfboard into Hurricane Sam, and the waves were incredible

Many indicators point toward the high probability of a busy season. The position of several key atmospheric features are noteworthy, and the ocean appears primed to support significant storms.

Among the elements being monitored are:

The loop current. Some researchers say unusually high temperatures in the Gulf of Mexico loop current are an ominous sign for the season ahead. The loop current is warm-core eddy that meanders north of the Florida Straits and Yucatán Peninsula. The current could give storms an extra boost if they cross over it — but it’s one piece in a much larger atmospheric puzzle.

La Niña. La Niña is a dropping of sea surface temperatures in the eastern tropical Pacific. It sets in motion a chain-reaction process that favors increased Atlantic hurricane activity. Specifically, it cools the air over that relative temperature minimum in the eastern Pacific, spurring sinking motion there. That makes it easier for air over the Atlantic to rise and feed big storms.

Wind shear. Wind shear is a change of wind speed or direction with height. Too much shear can disrupt a fledgling storm’s circulation and tear it apart before it has the opportunity to organize. Shear can also spell the demise of a strong hurricane.

NOAA’s outlook also pointed to “an enhanced African monsoon” which supports more disturbances from Africa entering Atlantic waters, where they can develop into storms.

2022′s first storm, once it’s named, will be called Alex. Should all of the 21 names on the National Hurricane Center’s list be used, forecasters will turn to a supplemental list set of names. The supplemental list was developed after the record-setting 30 storms in 2020 that led forecasters to use Greek letters after 21 storms had earned names.

In recent years, an uptick in early-season storminess has been noted. NOAA has considered moving the “official” start of Atlantic hurricane season from June 1 to May 15, reflecting observed trends in a warming world. That would also match the May 15 start date of hurricane season in the Eastern Pacific.

Irrespective of how many storms form, every year forecasters stress that it takes only one storm to have a memorable and potentially devastating impact on a community. In early May, the Hurricane Center led a public awareness campaign to urge preparedness for the upcoming season.

“Early preparation and understanding your risk is key to being hurricane resilient and climate-ready,” said Gina M. Raimondo, secretary of the Commerce Department, which oversees NOAA.