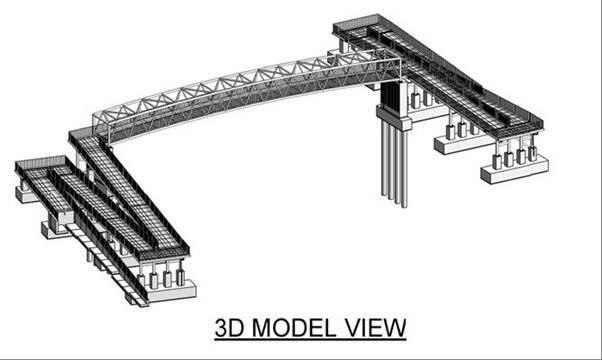 A NEW bridge planned for one of Oswestry’s main junctions risks damaging the county’s reputation – and could mean less funding for future projects, a councillor has warned.

Ahead of a full meeting of Shropshire Council on Thursday (July 7), Councillor Duncan Kerr has filed a motion filled with concerns about the new access bridge to the proposed innovation park at Mile End on the edge of Oswestry.

The Shropshire Council adopted LTN 1/20, which sets new standards for cycling provision and accessibility, in September 2020

But only five months later the council submitted then subsequently approved plans which Cllr Kerr says will breach that standard by constructing an access bridge to its proposed new innovation park in Oswestry.

In his motion to the council, Cllr Kerr wrote: “As can be seen from the accompanying 3D diagram this bridge would require a cyclist to dismount up to six times and is inaccessible to many disabled persons.”

On June 14 2021, the council received a letter from Rupert Furness, deputy director at the Department for Transport, in which he invited the council to bid for capital funding for a “mini-Holland” scheme aimed at encouraging non-car travel in the county.

The letter also showed the guidance in LTN 1/20 should be followed by local authorities “regardless of whether they are seeking Government funding”, Cllr Kerr said.

On June 9 2022 the Future Oswestry Group, a partnership established by Shropshire Council with representatives from Oswestry Town Council, Oswestry BID and the local community obtained this drawing.

That marked the first time the group has been consulted on the council’s design for this bridge, and it passed a resolution pronouncing themselves in clear opposition to the building of the bridge.

They agreed with Kerr that the design is non-compliant and that visually is not aesthetic enough for a key gateway into the town.

Councillor Kerr also added that: “The risks to the council in progressing with its current design are very high.

A 3D model of the bridge

He will also call for new designs to be put forward for the bridge, which he described as “non-compliant infrastructure”, with better aesthetics and which is fully compliant with the council’s adopted accessibility standards.

If this is done then the council’s LUF 2 application will provide the opportunity to seek additional funding for the infrastructure, Cllr Kerr said.

The meeting will take place on Thursday, at which council bosses will have the chance to respond to the motion.