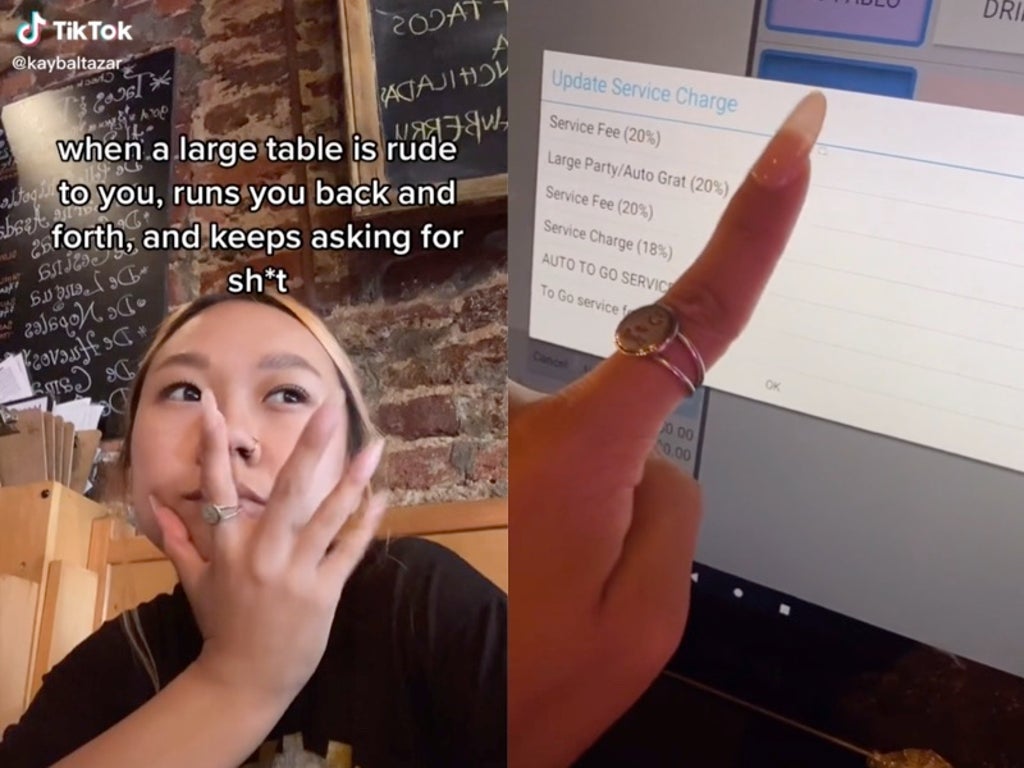 A restaurant server has sparked a debate about tipping after claiming in a TikTok that she includes an automatic gratuity of 20 per cent when large parties of customers are “rude”.

Kayla Baltazar, who goes by the username @kaybaltazar on TikTok, made the claim in a TikTok uploaded over the weekend, in which she can be seen sitting at a restaurant table, before the video cuts to a clip of her clicking on a register button that updates the gratuity to “large party/automatic gratuity”.

“When a large table is rude to you, runs you back and forth, and keeps asking for s***,” Baltazar wrote on the video, adding in the caption: “I’m usually really nice and never add it but people are so mean lol I’m just trying to do my shift and go man.”

The video, which has since been viewed more than 1.1m times on TikTok, has sparked a range of reactions from users, with some applauding Baltazar while others have criticised her for complaining about waiting on customers.

“Good for you,” one person commented, with another viewer writing: “As you should! It’s so gross how entitled people feel all the time and treat workers so sh*tty.”

The video also prompted another server to reveal that they would “never work at a restaurant that doesn’t have a gratuity charge for large parties”, while someone else said they were supportive of the tactic as long as the table is informed, adding: “I’m super cool with this. But let the table know, don’t be shady.”

However, viewers also found issue with the TikTok, with many accusing Baltazar of complaining about “doing her job”.

“Imagine doing the job you were hired to do and being mad about it,” one viewer wrote.

Another commented: “So you’re upset about doing your job?”

The responses prompted clarification from Baltazar, who revealed in the comments that the restaurant where she works “automatically adds [the gratuity]” to larger tables.

She also noted that those “offended” by the “joke” should self-reflect, writing: “ALSO if you’re offended by a joke you should probs check yourself! We’re servers not servants.”

While Baltazar claimed that the TikTok was a joke, one viewer’s comment suggesting that there needs to be a “30 per cent option” prompted her to respond that she wishes and “it’s what we deserve putting up with all this bs”.

Veterans' crisis calls on the rise amid news from Afghanistan

Veterans' crisis calls on the rise amid news from Afghanistan