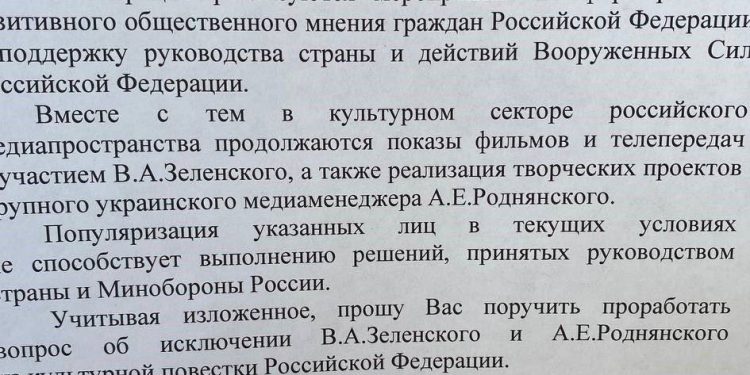 
Russia’s Defence Minister Sergei Shoigu has called for the country to ban all the work of Ukraine-born super-producer Alexander Rodnyansky as well as any film and TV work of Ukraine President Volodymyr Zelensky, according to Russian news site The Insider.

In the report, Shoigu, who is part of Vladimir Putin’s inner circle, is said to have sent an official letter (pictured below) to Russia’s minister of culture asking for both Rodnyansky and Zelensky’s work to be “excluded from the cultural agenda” in Russia. The move comes as various informal cultural sanctions have been issued upon Russia since the country began its invasion into Ukraine on February 24.

The letter, which was leaked to the press, has been translated to Deadline from a well-known source. It states the following:

“As part of a special operation, the Ministry of Defence is taking measures to shape a positive public opinion of Russian citizens in support of the country leaders and the actions of the Russian armed forces. At the same time, in the cultural sector of the Russian media space, films and TV programs with the participation of V.A. Zelensky continue to be shown, as do the creative projects of a major Ukrainian media manager, A.E. Rodnyansky.

“Popularization of these persons in the current conditions does not contribute to the implementation of decisions taken by the country leaders and the Russian Ministry of Defence.

“Taking into account the above, I ask you to work through the issue about the exclusion of V.A. Zelensky and A.E Rodnyansky from the cultural agenda of the Russian Federation.”

Rodnyansky, who is behind a slew of esteemed international festival hits like Andrey Zvyagintsev’s Leviathan and Lovelesswhich both earned Oscar nominations for Best Foreign Language Film, condemned the letter saying it would hurt the established and burgeoning Russian filmmakers that he champions the most.

“Formally, this would mean that no project of mine can get state financing and the Ministry of Culture or the Russian Film Fund and Russian officials will do their best to undermine everything that I do in the future,” Rodnyansky told Deadline. “I don’t really care about that. I am completely independent and there is absolutely no way that I will ever even consider taking money from the Russian state. I will continue to produce my films as planned.

“On the other hand, I am sure that this letter will have retroactive effect as well and that films by Zvyagintsev, [Kantemir] Balagov, [Kira] Kovalenko and every director that I worked with will be hurt. I cannot say that for sure, but I am pretty certain that they will become toxic to platforms or theaters and will not be as widely available as before.”

This week, Netflix announced it would once again be streaming Zelensky’s 2015 comedy TV series Servant Of The People to its U.S. subscribers.

Tim Tszyu vs Terrell Gausha fight, when is it?, how do I watch it?, preview, sparring, details

Tim Tszyu vs Terrell Gausha fight, when is it?, how do I watch it?, preview, sparring, details