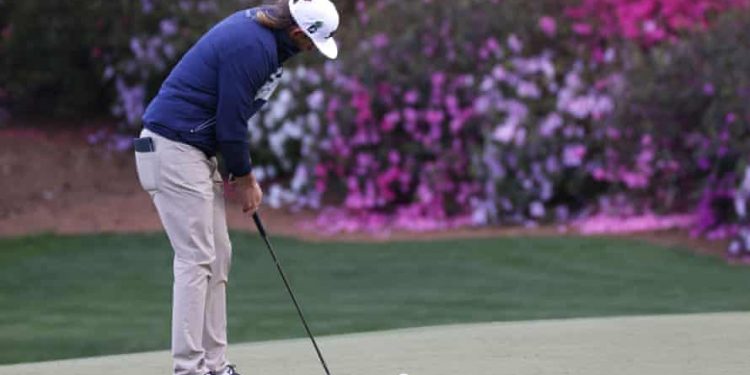 
It felt for so much of day three that Augusta National yearned for something even resembling a contest. It was Scottie Scheffler’s job to ensure one did not ensue. For 17 holes, he was a man in complete control of all around him. What happened next offers hope. There may be a thrilling Masters denouement after all.

There will be no sixth Green Jacket for Tiger Woods. Not at this attempt, anyway. Those who flocked to Georgia in search of yet another Woods redemption tale have been left disappointed. Freakishly cold weather and Scheffler’s powerful frontrunning added to an unavoidable sense of deflation. Plenty of polite applause, precious little roaring. Until, that is, Scheffler pulled his drive at the last into bushes.

Scheffler is the world No 1 and a player in outstanding form but perhaps he lacks the presence or panache as would so appeal to the galleries. He goes about his business in a functional manner. Maybe it is as simple as attendees wanting to witness a proper battle. As Scheffler stood firm, pretenders swung and missed. Curious things can happen on the final day, on the final nine, at Augusta National but for so long this major has been Scheffler’s to lose.

He will carry a three-shot lead, over Cameron Smith, into the last 18 holes. Scheffler posted a third round of 71 to edge to nine under par. Intrigue surrounds the impact of what transpired at the last – Scheffler eventually rescued a five on the par four – and whether Smith, an Augusta specialist, can rattle his opponent.

An example of the earlier inability of others to meaningfully challenge Scheffler was provided by Charl Schwartzel. The South African, a past Masters champion, holed his second shot to the par four 10th to jump to within five of Scheffler. One hole later, Schwartzel carved his second shot horribly right into spectators. Scheffler, playing in Schwartzel’s company, had no cause to feel threatened at all as Schwartzel holed out for a bogey.

Scheffler had birdied the 2nd and 3rd to move to double digits under par. Context is provided by the fact many players reckoned that would be sufficient to claim this Masters. Scheffler moved to minus 11 at the 8th, a position he maintained through Amen Corner after cancelling out a bogey on 12 with a birdie at the 13th. The latter owed much to the kind of good fortune that has favoured Scheffler over three days. His tee shot to the par five was wayward but rebounded from a tree and into semi-rough.

Smith emerged as Scheffler’s most meaningful threat. The Australian reached five under for his round at the 15th, giving a seven under total, before handing a shot back to the course on the par three 16th. Still, Smith’s impressive Augusta record and recent success at the Players Championship provide hope for neutrals that Scheffler could be hauled into a day four scrap.

Scheffler’s bogey at the 14th after his approach spun off the green narrowed the lead to four. Given it had been six not long before, this was borderline exciting. Smith overshot the 18th green but saved par admirably. His second 68 of this week means a minus six aggregate. A mullet with a major?

As Scheffler dropped shots at the 14th and 15th, heads turned. The 25-year-old proceeded to make a birdie at the 17th, thanks to a terrific approach. At the last, finally, drama.

Woods’s challenge ended with a four-putt at the 5th, the first time he has encountered such a statistic in his Masters career. The greens were to bother Woods all day, with 36 putts included in a 78.

He is now seven over par, with round four really only going to be useful as a barometer of his physical condition. It is to be remembered even playing in this Masters, let alone for 72 holes, is a remarkable achievement given the scale of his injuries after a car crash 14 months ago. Still, the character of the man is such that he will be embarrassed by finishing on the nether regions of the leaderboard.

“It felt like I hit 1,000 putts out there,” said Woods. “I did what I needed to do ball striking-wise, but I did absolutely the exact opposite on the greens. I just could not get a feel for getting comfortable with the ball. Posture, feel, my right hand, my release, I just couldn’t find it.

“For as many putts as I had, you’d think I’d have figured it out somewhere along the line, but it just didn’t happen.”

Woods, one assumes, will already have next month’s USPGA Championship at Southern Hills on his mind. He won the same tournament at the same venue in 2007.

Im Sung-jae, second here in 2020, is at minus four. Justin Thomas moved from one to three under par within a trio of holes. The 28-year-old slipped back to even par at the 14th and collected shots at the 16th and 18th before a painful bogey at the last. Thomas, who signed for a 72 and one under total, must continue to rue his opening round of 76. Corey Conners is on the same score as Thomas.

Shane Lowry berated his caddie en route to a bogey at the 13th that shuffled him back to three under. Lowry had been two shots better off on the 9th tee. If Lowry’s frustration was understandable, it would have been better directed elsewhere. The Irishman lies two under after a 73. Lowry is not completely without hope but needs more Scheffler wobbling. So, apparently, do the patrons.