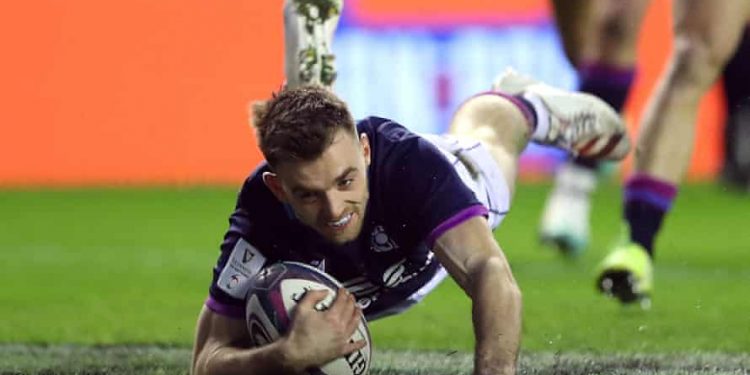 
If a sign of a team’s progress is their ability to win close matches, Scotland are heading firmly in the right direction. This was hardly a conclusive statement of their Six Nations title credentials but it was not a bad start.

It was a second successive victory over England for the first time since 1984 – they went on to win their second grand slam that year – and a third in five meetings with England.

If there are plenty of hurdles in the way before such thoughts can be entertained this year, Scotland will head to Cardiff next Saturday with a huge spring in their step. This was far from a perfect performance as their coach, Gregor Townsend, will no doubt point out when the analysis begins in earnest. But after the victories in Llanelli, Twickenham and Paris in the past 16 months, and another tight squeeze against Australia in the autumn, the belief coursing through the tartan ranks is palpable. The encouraging thing is they can play much better than this, but victory was everything. Momentum is firmly with them.

Scotland enjoyed more possession and territory than any other side in the Six Nations last year. Here, though, they were living off scraps for the first hour. After 50 minutes they had spent seven seconds in England’s 22.

The home side had one real opportunity to score a try and they took it with alacrity. It started with a quick lineout routine and when Maro Itoje rushed up in defence, Stuart Hogg did brilliantly to skip around the England lock’s tackle and slip the charging Darcy Graham through a gap between Nick Isiekwe and Elliot Daly. The Edinburgh wing sized up the situation, stepped inside Joe Marchant and found the supporting Ben White on an inside support line.

What a moment for the 23-year-old London Irish scrum-half. His inclusion in the squad – ahead of the more experienced George Horne – and then the matchday 23, given the form of Edinburgh’s Ben Vellacott, raised a few eyebrows north of the border.

When Ali Price went off for an HIA after 12 minutes, those concerns only heightened further. One wondered if Townsend had taken an unnecessary gamble.

No wonder White was grinning as he was handed his coat on the sidelines following Price’s return. A 12-minute cameo and a debut try.

Hogg spoke passionately before the match about the influence of the defence coach, Steve Tandy, on this team.

Since the Welshman came in after the 2019 World Cup, said Hogg, Scotland have learned to love defending as much as attacking. The stats bear Hogg out. Scotland have had the best defence in the championship for the past two years. There was more evidence of it here, in spades.

England seemed sure to score after half an hour when they mauled a lineout over the line, but Scotland got bodies under the ball and held it up. It was a major let-off. In the final stages, having regained the lead with Finn Russell’s penalty eight minutes from time, they defended frantically but with trust in their systems.

If they rode their ruck at times, they continued to believe and got their reward when Russell’s cross-kick was patted forward into touch by Luke Cowan-Dickie. It was hard not argue that Graham, a threat all day with his footwork and pace, would not have scored. The referee, Ben O’Keeffe, agreed and Murrayfield roared its approval. “Scotland, Scotland” reverberated around the ground.

The chorus of Flower of Scotland sprang up as the hosts had successive five-metre scrums against England’s seven-man pack. If it was a surprise they did not opt for another one, but Russell’s penalty gave them a lead to defend as the minutes kicked down.

As the game ended with four successive scrums in Scotland territory, that nagging doubt persisted.

Were England going to steal it at the death? Not this time. Graham won the ball back among a tangle of bodies and Hogg booted the ball off the field, punching the air in celebration. Pandemonium. Scotland are on the march.