Scratchpad gets Series B boost for popular Workspace app 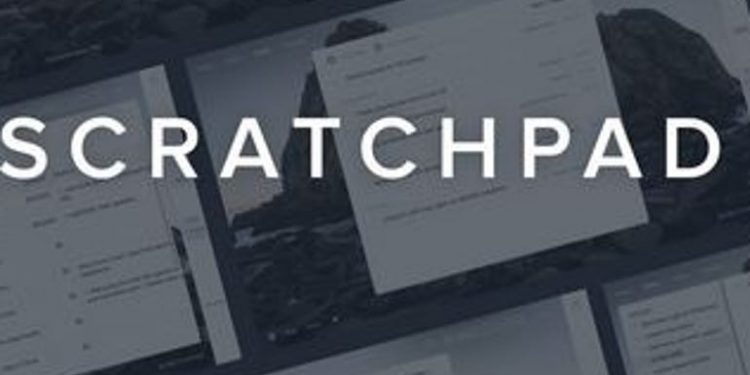 
Artists and musicians need studios. Chefs have to have kitchens. Mechanics require garages. So it follows that sales and revenue-producing enterprise staff members should have their own independent workspaces in order to use their menagerie of tools as efficiently as is possible.

Scratchpad, created specifically for Salesforce’s 150,000 users, has taken note of this, as have its venture capitalist funders. The 2-year-old San Mateo, Calif.-based startup, which has launched a new digital workroom specifically for Salesforce users designed to simplify workflows for revenue teams, today revealed that it has landed a $33 million Series B capital round, bringing its total funding to $49 million. Existing investor David Sacks’s Craft Ventures led the preemptive round with continued participation from Accel.

The funding deal needed a mere three text messages in a span of under 30 minutes to take place, CEO and co-founder Pouyan Salehi told ZDNet. Oh, and no pitch deck was needed.

“The funny part is that we didn’t ask for it,” Salehi said. “We don’t have any debt, and we weren’t fund-raising. But the offer was made during a conversation we were having, and we decided we were willing to sell a part of the company in order to go bigger. So we did the deal.”

All sales information funnels into the platform

Scratchpad’s value proposition is pretty simple: Every iota of communication to a salesperson — whether it be in Slack, Chatter, Teams, text, email, or similar channel — simply shows up in the all-inclusive Scratchpad Revenue Team Workspace, the first place a sales professional will look each morning. The platform provides a landing pad for all inbound messages so the user can act on them as needed in handing off to Salesforce, calendar, email, notes, docs, and sheets.

“Collaboration tools such as Slack and Salesforce Chatter were never designed and built with sales teams and their workflows in mind,” Salehi said. “They were adopted by sales teams because the rest of the company used them. They were bolted to existing sales workflows without consideration of the user experience for salespeople, which creates tremendous disruptions in speed, focus, and data access, while also adding unnecessary drag to the sales team.”

Salesforce, for years the most popular CRM software in the world, is an indispensable tool for most salespeople, but it can be clunky and difficult for some people to use — especially if the user is neurodivergent. Neurodiverse people experience, interact with, and interpret the world in unique ways, unlike mainstream thinkers. Some neurodivergent people have issues with ADHD, dyslexia, and other learning difficulties.

Because Scratchpad is customizable to individual users, it also enables neurodivergent workers — estimated to be between 10 and 30 percent of the overall U.S. workforce — to operate in a more comfortable environment suited to themselves. It enables shortcuts, personal reminder notes, and other helpful tools that some people need to navigate Salesforce’s rigid protocols in an easier fashion.

It can be difficult and time-consuming for sales team members to memorize all the protocols, rules, passwords, and everything else that goes with using sales and collaboration applications like Salesforce on a daily basis. Add the constant pressures of meeting sales goals and other performance metrics, and the job can be daunting for many people.

High turnover rates in sales jobs are often blamed on problems using rigid tools. Estimates of annual turnover among U.S. salespeople run as high as 27% — twice the rate in the overall labor force. In many industries, the average tenure is less than two years.

Most reps still use general-purpose spreadsheets, docs, note apps, and task managers to do their jobs only to then suffer from hours of manual data entry to update their CRM for their managers. Revenue teams are literally paying their reps to complete administrative work instead of revenue-generating work. Additionally, the data quality in most CRMs remains poor and sales process adherence is mostly a dream, Salehi said.

Scratchpad claims to be the only software platform that consolidates tools sales teams use within a single, unified revenue team workspace, Salehi said. “The product basically sells itself through word of mouth and the Salesforce app store.”

At the moment, Scratchpad is affiliated only with Salesforce, but that focus may open up sometime in the future, Salehi said, to allow other outside tools to be incorporated into the platform.

“When you’re on the board and see a company keeps beating its forecasts, you have to be a little dense not to ask if you can invest more,” Sacks, co-founder and general partner at Craft Ventures, said about the funding transaction.

Scratchpad said it has “tens of thousands of users” (salespeople) and “thousands of companies” using its platform, including Algolia, Allstate, Quora, Twilio, Udemy, Upwork, Vanta, and Vidyard.