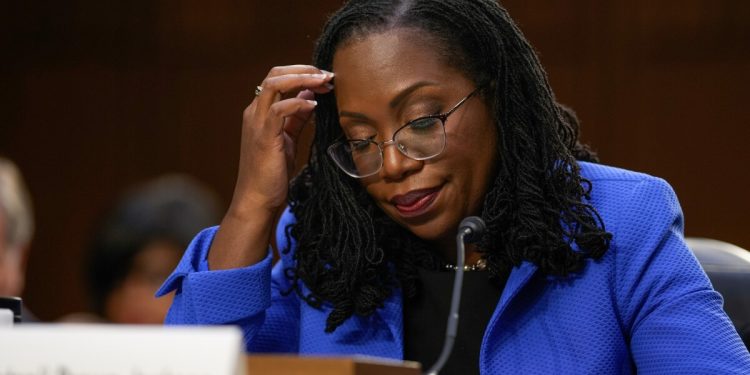 As the Senate Judiciary Committee gaveled in Monday morning to advance Jackson’s nomination, the California Democrat was notably absent. With the panel evenly divided between Democrats and Republicans, Padilla’s vote is critical.

“Due to a passenger medical emergency, Sen. Padilla’s flight was turned back and returned to LAX, delaying his arrival to Washington,” a Padilla spokesperson said. “He boarded the first available flight this morning and will arrive this afternoon.”

A committee spokesperson said the panel will wait for Padilla’s arrival to vote. The committee adjourned Monday afternoon with plans to return later in the day with the senator.

The evenly split committee is expected to deadlock along partisan lines on a vote to advance Jackson. An 11-11 vote would add another layer to the process to elevate Jackson to the high court, but likely won’t stop her ascension to become the first Black female justice.

The vote will follow hours of statements from the panel’s 22 members.

Sen. Richard J. Durbin (D-Ill.), the committee chairman, called Monday’s vote a “historic moment for this committee and for America.”

This is the first time the panel has considered a Black woman for a seat on the Supreme Court. Republicans said they might have nominated Judge Janice Rogers Brown in 2005, but Democrats voiced opposition if she were tapped for the high court.

Sen. Lindsey Graham (R-S.C.), who voted to elevate Jackson to the D.C. Circuit less than a year ago but opposes her nomination to the Supreme Court, said “she would not have been before this committee” if Republicans were in charge of the Senate.

A deadlock Monday would be the first time the judiciary panel has split on a Supreme Court nominee in more than three decades. In September 1991, when Biden chaired the committee, it voted 7-7 to send Clarence Thomas’ nomination to the floor with a favorable recommendation. That motion failed, but the committee voted 13-1 to send the nomination to the floor without recommendation, and Thomas was confirmed the following month, 52-48.

If the committee vote is a tie, Senate Majority Leader Charles E. Schumer (D-N.Y.) will have to file a discharge motion to place Jackson on the executive calendar, a move that allows the chamber to take up the nomination the following day. Despite Padilla’s delayed arrival, that motion is expected to occur later Monday.

An identical process played out during the nominations of Justice Department officials Vanita Gupta and Kristen Clarke, as well as other judicial nominees who deadlocked in committee and are still awaiting confirmation.

The discharge process requires up to four hours of debate, equally divided between parties, and a simple-majority roll call vote.

As soon as Tuesday, Schumer is expected to file cloture on Jackson’s nomination, kickstarting up to 30 hours of debate before two additional simple-majority votes: one to end debate and the other to confirm Jackson as retiring Justice Stephen G. Breyer’s successor, likely before the end of the week.

Democrats appear united in support of Jackson, and Sen. Susan Collins (R-Maine) has said she will vote to confirm her, assuring the final tally will be bipartisan.

Sens. Lisa Murkowski (R-Alaska) and Mitt Romney (R-Utah), two of the Republicans most likely to break ranks and join Collins, have not said how they plan to vote.

Cold or Covid? How to tell the difference between symptoms

Cold or Covid? How to tell the difference between symptoms