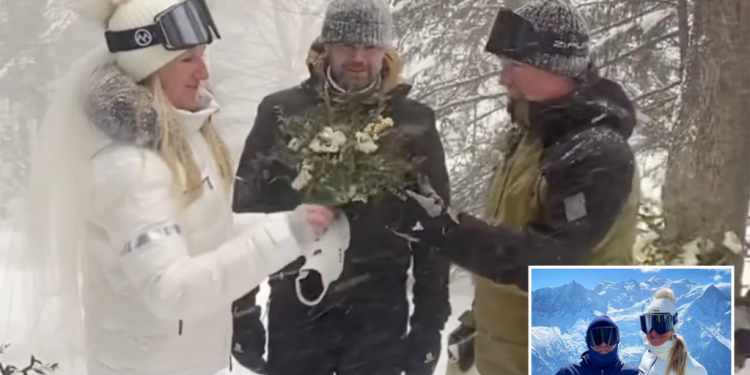 
But she wasn’t there just to hit the slopes. She was there to marry Matthew Gnoza in a way that may put other winter weddings to shame.

The couple tied the knot on March 12. Healey said she picked the day because it was the same day as her late father’s birthday, who died unexpectedly.

Healy, 40, and Gnoza, 48, are both avid skiers and reside in Sunderland, Vermont. The couple even had their first date on a ski mountain and have traveled to different resorts around the world. Gnoza is also the head coach for the U.S. Ski & Snowboard Mogul team.

“We both knew getting married on skis made sense for us, we aren’t warm weather, tropical kind of people,” she added. “We love winter and snow and skiing so for us it made perfect sense.”

The couple’s family and friends joined them on their special day, but they also had an unexpected visitor: a snowstorm.

According to the Burlington Free Press, the state was experiencing a snowstorm that brought as much as 17 inches of snow in some areas.

Healy said she expected inclement weather but thought it was just going to be rain turning into snow as the temperatures dropped. What she didn’t anticipate were high winds and blizzard-like conditions. The couple originally wanted to get hitched on the mountain’s summit but chose a lower elevation surrounded by trees that offered some protection against the harsh winter weather.

“We did not anticipate the bomb cyclone!” she said. “It was a wild ride that day. It truly was a nice day for a white wedding!”

The couple’s love for skiing was also reflected in their vows.

“I said in my vows that it was on thousands of lift rides that I had the honor of getting to know Matt and falling in love with him,” Healy continued.

Other lines included, “I promise to wait for you at the bottom of every line we ski and the top of every mountain we climb,” and “I promise to always be by your side, whether waiting in line for first chair on a powder day or skinning up for one last lap after the lifts close.”

Despite enduring winter’s wrath, Healy said it was the perfect winter wedding and the snowstorm was the “icing on the cake.”

And if you thought the couple would go somewhere warm for their honeymoon, think again.

The couple spent their time in Megeve, France, before going to Valmalenco, Italy. Both are ski resorts.

‘I’ve hated the Tories since I was a kid. Nowt’s changed’