Stop a sudden surge of inflation devaluing your portfolio


The end of national lockdown is now so close that many of us can already imagine that first taste of freedom.

The first sip of a cold pint enjoyed with an old friend, the mouthwatering first bite of a long-missed dish served at a local restaurant.

But William Meadon, portfolio manager at investment trust JPMorgan Claverhouse, warns that there may be a bitter aftertaste to these joyful rediscoveries – inflation.

‘There are only a finite number of tables at a pub or restaurant and I hear a lot are fully booked for one or two months out,’ he says. ‘It must be tempting as a pub or restaurant owner to put up prices, so if you are planning to go out you’re likely to see a bit of inflation.’ 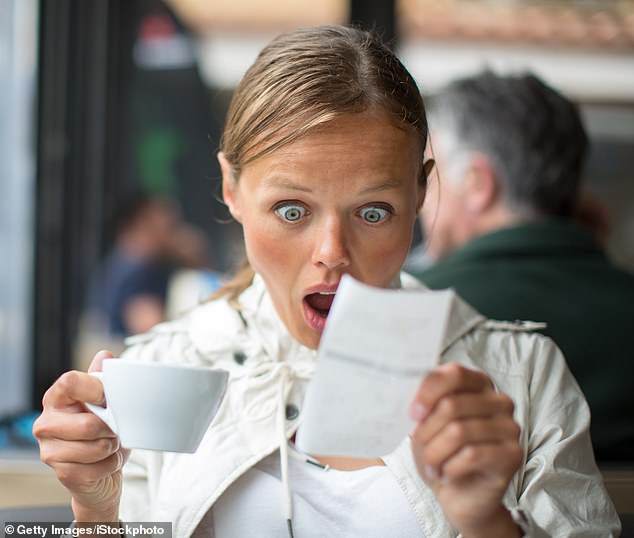 Shocking: If inflation starts to rise, it won’t just be these luxuries that bear the brunt

You might think that an extra pound or two for your first meal out in months is a price worth paying. But if inflation starts to rise, it won’t just be these luxuries that bear the brunt.

Although inflation fell from 0.7 per cent to 0.4 per cent in February a number of economists, central bankers and investors are warning that rising inflation will soon be back on the menu and that ordinary investors simply aren’t ready for it.

It’s not just meals out and pubs that are likely to see pent-up demand. Hotels and high street retailers may feel they are able to push prices higher in comparison to last year when demand was at rock bottom.

The oil price has also rocketed to over $60 a barrel. Almost a year ago, the price was so low it even turned negative for a day. That leads to higher manufacturing and transport costs.

Households are also expected to go on a massive spending spree, unleashing a portion of the £180billion in extra savings they’re now sitting on due to reduced spending during lockdown.

This, combined with billions of pounds pumped into the financial system by the Government during the pandemic, means the economy could ‘run hot’ for a while.

When there’s more money swilling about, inflation tends to creep up. People are willing to spend more, so businesses are able to charge more.

David Coombs is head of multi-assets at investment manager Rathbones. He believes that while inflation is now just 0.4 per cent, higher inflation over the summer is ‘inevitable’.

His opinion aligns with that of Bank of England governor Andrew Bailey who forecasts that inflation will pick up ‘reasonably quickly’ towards the Bank’s 2 per cent target in the next couple of months.

Coombs believes that workers will not have the power to demand higher wages – many are happy just to have kept their jobs and realise that times have been difficult for most employers.

Similarly, a rising number of workers in the gig economy do not have the collective power to demand higher wages.

Workers are in a very different environment to the union-dominated one seen half a century ago.

But even if inflation doesn’t escalate, it is likely to be higher than we’ve seen in recent years. So it will pay to think ahead.

SO HOW SHOULD INVESTORS PREPARE?

Rob Morgan, investment analyst at investment platform Charles Stanley Direct, believes inflation could be bad news for investors. ‘A lot have not positioned their portfolios at all for this eventuality,’ he says.

‘Many newer investors will only have experienced a low inflation environment.’ One sector he believes could suffer is technology.

Over the past year, many technology shares have boomed, making up an ever larger proportion of many investors’ portfolios.

‘Technology companies have risen in value in the hope of ‘jam tomorrow’,’ explains Morgan. ‘Investors have been willing to accept lower income from these shares in the expectation of higher profits in the future. But if there is inflation, the real value of these future profits falls.’

Bonds may also suffer. Morgan says: ‘When inflation is low, the coupon [interest] that a bond pays can look attractive.

‘But when it rises, the fixed income that bonds pay looks less appealing.’ Don’t think you are safe if you haven’t been actively buying technology stocks and bonds. Morgan warns that ‘hidden dangers lurk’.

Technology stocks are now so big that the biggest six alone make up almost 15 per cent of a global index fund.

So even if you have what looks like a globally-diversified portfolio, you may still have high exposure to technology stocks. Investors in passive funds also need to watch out. ‘

A lot of passive investments that are split between bonds and shares may be challenged by high inflation,’ Morgan adds.

WHAT INVESTMENTS ARE SAFER FROM INFLATION?

Paul Danis, head of asset allocation at wealth manager Brewin Dolphin, believes commodities and financial companies are good ways to counter rising inflation. ‘These sectors have already been outperforming since November,’ he adds.

Commodities tend to perform well at times of strong economic growth – of which rising inflation is a symptom.

Financial companies such as banks tend to benefit from higher interest rates, which become more likely when inflation is on the rise.

For funds that contain a number of relatively inflation-proof holdings, Brewin Dolphin suggests the likes of Lindsell Train UK Equity and Fundsmith Equity.

Coombs believes investors could be in for a bumpy ride, particularly while the outlook for inflation remains uncertain.

‘I’m investing in companies I think will win out in the long term,’ he says. ‘The likes of Amazon, Rentokil, Estee Lauder and Coca-Cola. I look for companies with a fantastic market position, with strong balance sheets that I know can get through economic cycles.’

Coombs suggests investors look for the best companies in each sector that make products customers would be willing to pay a bit more for.

That way, if inflation and the cost of production rise, companies will be able to pass on extra costs to customers rather than taking a hit to their profits.

He also recommends holding some cash to take advantage of bargains if shares do take a tumble. ‘It’s like waiting for the summer sales – except there is a chance the summer sale might get cancelled,’ he says.

HOW CONCERNED SHOULD INVESTORS BE?

‘It’s no bad thing if a little bit of inflation does come back into the system,’ says JPMorgan’s Meadon. ‘It oils the wheels of the machine.’

After all, as well as eroding the value of money, inflation also eats away at the value of debt. For a country that has borrowed more in the past year than in any other outside of wartime, some debt erosion would be welcomed.

Will Hobbs, chief investment officer at Barclays Wealth & Investment, says we only have to worry if inflation carries on rising.

He adds: ‘A certain amount of inflation tends to be welcomed by markets because it speaks of growth.

‘It depends on the drivers, of course, but most of the time when inflation and interest rates are rising you find stocks do well because the same forces pushing up inflation are pushing corporate profits higher.

However, once you get to a certain level the impact turns negative as interest rates choke off growth.’

He believes that inflation of zero to three per cent tends to be good for shares in general.

When it gets to between three and six per cent, financials, commodities and real estate tend to benefit.

Above six per cent, little does well apart from gold in some instances.

‘Diversification is the only appropriate expression of your humility about the future,’ adds Hobbs.

If inflation does start to rise, companies that make profits in the UK are likely to benefit, adds Charles Stanley Direct’s Morgan. In this event, he thinks Aberforth UK Smaller Companies Investment could be well placed as it invests in good value small businesses.

Morgan also likes Personal Assets Trust, which offers a balanced portfolio that includes large multinational companies that should be able to pass on extra costs to customers if inflation rises.

WEREN’T WE WORRIED ABOUT DEFLATION?

While most economists – including the Bank of England – predict a strong bounce back in the UK economy, there is still a chance it will be muted.

If savers don’t splash out, if caution endures or if there is an unforeseen obstacle to our roadmap out of lockdown, the economy could remain weak. In that case, there is a greater chance of lower inflation and a need for continued low – or even negative – interest rates to encourage spending and boost demand.

Banks and building societies have been given until the summer to prepare for negative interest rates, should the Bank of England decide they are necessary.

YOUR TAX BILL COULD GO UP TOO

There is a surprise fall-out from rising inflation: you may face a higher tax bill.

In his Budget earlier this month, Chancellor Rishi Sunak announced that all allowances and tax thresholds would be frozen for the next five years.

That means that millions more people will have to start paying income tax or be drawn into a higher tax bracket.

Allowances for inheritance tax, lifetime pension values and capital gains will also remain static. Should inflation start to rise, the impact will be even more dramatic as these allowances become stingier in real terms.

Becky O’Connor, head of pensions and savings at wealth manager Interactive Investor, has advice on how households can counter this.

Isas as well as pensions for retirement saving – especially if you are on your way to exceeding the pension lifetime allowance limit of just over £1million.

Use ‘Bed & Isa’ facilities. These allow you to move investment holdings that could potentially be liable to capital gains tax in the future into an Isa wrapper where future gains are free of this tax.

Pass on your pension. Rising house prices, while never a given, will increase inheritance tax liabilities on estates over time.

It’s an ‘honor’ to play an autistic character

It's an 'honor' to play an autistic character