Suicide rates in second-half of 2020 were same as years before, official data shows

Suicide rates fell in England and Wales in 2020, official data shows — despite fears the first lockdown would trigger a spike.

Figures from the Office for National Statistics (ONS) found the overall suicide rate was 9.8 deaths per 100,000 people from April 2020 to December 2020.

The drop-off came despite widespread fears the stay-at-home order from March to June that year and the shutdown of NHS mental health services could lead to a wave of suicides.

The fears were encapsulated by former US President Donald Trump who warned ‘you’re going to have suicides by the thousands’ in late March 2020 as he resisted calls for lockdown.

Samaritans, the suicide prevention charity, hailed the downturn in deaths but insisted the figures do not ‘alleviate the pressures that the pandemic has exacerbated’.

The data only goes up to December 2020, when the third brutal lockdown was enforced, and does not show the long-term effect of repeated restrictions. 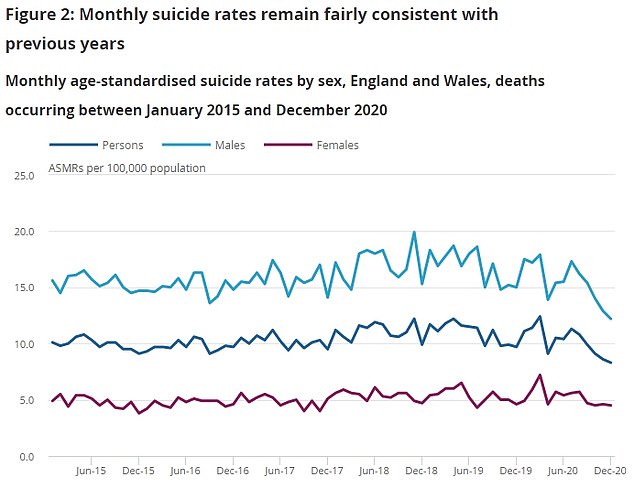 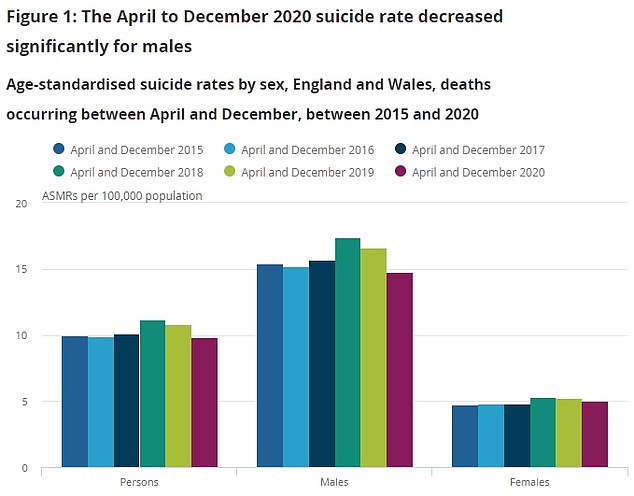 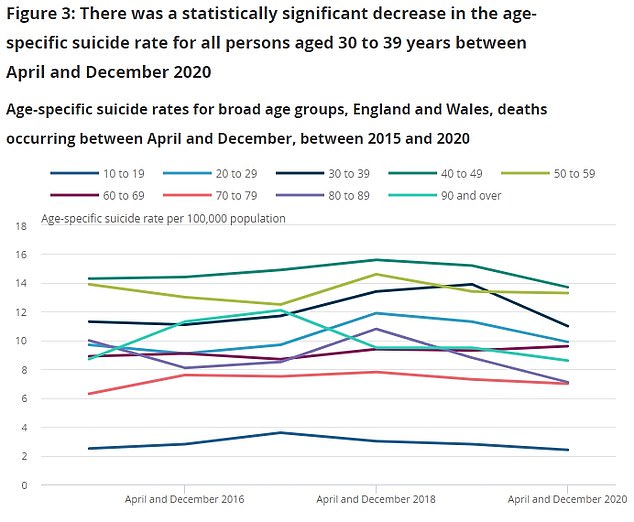 First year of Covid pandemic did not trigger baby boom

Conceptions in England and Wales fell to a 17-year low during the pandemic’s first year, according to data released today.

This decline comes despite some predictions of a post-lockdown baby boom in part due to couples being stuck at home.

The ONS also recorded a rise in older women in the UK becoming pregnant with conception rates for over 40s rising to a record 17.1 per 1,000 women in 2020.

Overall conceptions in England and Wales have continued to decline for the fifth year in a row from 876,934 conceptions recorded in 2015 and a fall of some 4,000 compared to 2019.

Women are becoming more and more likely to conceive at an older age, while in contrast the pregnancy rate among under 18s have plummeted by 17 per cent in a year.

Samaritans previously cited concerns the economic downturn during the first year of the pandemic could have impacted those at greatest risk of suicide in recessions — middle-aged men.

But the ONS data today revealed the fall in suicide rates was actually driven mostly by a drop-off in men of all ages. The greatest fall was in men in their 30s.

Samaritans said the new data ‘gives us a much better understanding of suicide during the first nine months of the pandemic’.

An ONS spokesperson said: ‘There is no evidence that the number of suicides increased between April and December 2020 during the coronavirus pandemic.’

Rates were lower in each month from September to December 2020 compared with the those months in 2019.

But ‘none of these were statistically significant’, statisticians said.

The ONS figures show rates decreased in most age groups, with a significant reduction in men and women aged 30 to 39 years between April and December.

The ONS said the fall may be skewed by disruptions to coroner registrations during the first year of the pandemic.

Julie Bentley, chief executive at Samaritans, said: ‘Today’s ONS suicide data gives us a much better understanding of suicide during the first nine months of the pandemic.

‘It is notable that the number of suicides at that time slightly decreased, particularly in men, compared to previous years. However, this latest data is from 2020.

‘England must urgently follow Wales and launch its national real time suicide surveillance system, enabling us to better understand what’s happening with suicide rates now, rather than two years down the line.’

She added: ‘This is particularly important given what we know about suicide rates and economic uncertainty and hardship.

‘Every life lost is a tragedy and this new data is no consolation to anyone who has been bereaved by suicide.

‘It also doesn’t alleviate the pressures that the pandemic has exacerbated and created, and our listening volunteers continue to support people who are struggling right now.’

The ONS findings are consistent with other studies, which did not find any increase in suicides in the seven months following the first lockdown on March 26, 2020.

Julie Stanborough, health analysis and life events, said: ‘The latest available evidence shows that suicide rates did not increase during the early stages of the pandemic, which is contrary to some speculation at the time.

‘Instead, we found suicide rates to be lower between April and July 2020 — the first wave of Covid in England and Wales — when compared with the same period in previous years.’

Research from other countries, including the US, Germany, Japan and Australia, found rates stayed the same or fell in the early months of the pandemic.

For confidential support call the Samaritans in the UK on 08457 90 90 90, or visit a local Samaritans branch for details.