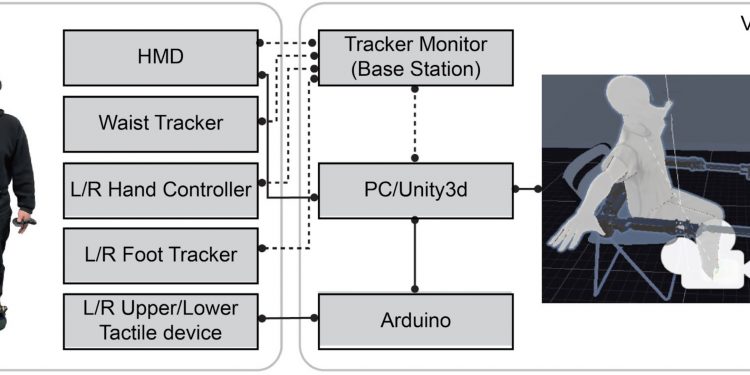 
Research teams at the University of Tokyo, Keio University and Toyohashi University of Technology in Japan have developed a virtual robotic limb system which can be operated by users’ feet in a virtual environment as extra, or supernumerary, limbs. After training, users reported feeling like the virtual robotic arms had become part of their own body. Published in Scientific Reportsthis study focused on the perceptual changes of the participants, understanding of which can contribute to designing real physical robotic supernumerary limb systems that people can use naturally and freely just like our own bodies.

What would you do with an extra arm, or if like Spider-Man’s nemesis Doctor Octopus, you could have an extra four? Research into extra, or supernumerary, robotic limbs looks at how we might adapt, mentally and physically, to having additional limbs added to our bodies.

Doctoral student Ken Arai from the Research Center for Advanced Science and Technology (RCAST) at the University of Tokyo became interested in this research as a way to explore the limits of human “plasticity”—in other words, our brain’s ability to alter and adapt to external and internal changes. One example of plasticity is the way that we can learn to use new tools and sometimes even come to see them as extensions of ourselves, referred to as “tool embodiment,” whether it’s an artist’s paintbrush or hairdresser’s scissors.

To explore these concepts in action, teams at the University of Tokyo, Keio University and Toyohashi University of Technology in Japan collaborated to create a virtual robotic limb system. They then asked participants to perform tasks in virtual reality (VR) using the virtual limbs.

“We investigated whether virtual robotic arms, as supernumerary limbs, could be perceived as part of one’s own body, and whether perceptual changes would occur regarding the proximal space around the robotic arm,” said Arai.

Once the participants learned how to use the virtual system, they reported feeling like the virtual robotic arms had become their own extra arms and not just extensions of their real arms or feet. “The scores of subjective evaluation statistically became significantly higher for ‘sense of body ownership,’ ‘sense of agency’ and ‘sense of self-location,’ which are important measures of embodiment, where the supernumerary robotic limb is able to become part of the body,” said Arai.

The team also found that the participant’s “peripersonal space” (the area around our bodies which we perceive as being our personal space) extended to include the area around the virtual robotic arms. As Arai explained, “We succeeded in capturing the positive association between the perceptual change in visuo-tactile integration around the supernumerary robotic limbs (peripersonal space), and the score change of subjective evaluation of feeling the number of one’s arms increased (supernumerary limb sensation).”

Next, the team wants to look at the potential for cooperative behavior between participants’ own arms in virtual reality and the virtual robotic arms. “Investigating the mechanisms and dynamics of the supernumerary limb sensation reported here from the standpoint of cognitive neuroscience will be important in exploring human plasticity limits and the design of supernumerary robotic limb systems,” said Arai. The hope is that by understanding the perceptual changes and cognitive effort required to operate a supernumerary robotic limb system in VR, this will aid in designing real-life systems in future which people can use naturally just like their own body.

Provided by
University of Tokyo