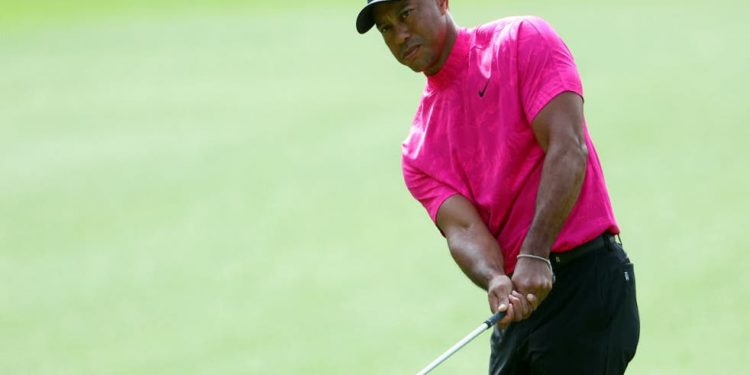 
The Masters is back, and so too is Tiger Woods. Now 25 years after his first victory at Augusta National, the 15-time major winner has made a stunning return to golf’s most iconic tournament, just over a year after a near-fatal car crash threatened to end his legendary career in the sport.

Woods’ latest comeback has dominated the build-up to the 86th Masters, with the 46-year-old only announcing on Tuesday that he was ready to play following months of extensive rehab. The five-time Masters winner said he would not be at Augusta if he did not think he could win the tournament, and a sixth green jacket would eclipse even his remarkable 2019 triumph as the greatest comeback in sports history.

The American gets underway following an afternoon of rain and thunderstorms on Wednesday, in what is set to be a wide-open field in the first major of the year. Hideki Matsuyama is the defending champion and Jon Rahm, Scottie Scheffler and Cameron Smith are notable contenders favoured with the bookies, while Rory McIlroy goes again on his quest to complete a career grand slam. Follow live updates from the opening day’s play of the Masters below:

WOW. Tiger Woods has landed his tee shot at the par-3 6th to within a foot on the hole! Goosebumps.

He was robbed of a birdie at the previous hole. Woods makes no mistake this time. He moves -1 through six holes with his first birdie of the week.

Woods found the fairway at the 5th to leave himself 215 yards or so to green – and that’s his best shot of the day so far! He finds the top shelf of the green with a lovely approach, the ball just rolling a touch down the slope, but that sets up a good chance for birdie.

You’re kidding! Woods can’t believe it. The birdie putt was on line and Woods had raised his putter in anticipation of the celebration, only for it to lip out. A tough break.

Cameron Smith, one of the favourites this week following his recent victory at the Players Championship, made a horror start with a double bogey at the 1st. He’s got one back though, with a sublime chip-in at the 4th.

Onto the par-3 4th for Woods now. His iron is hung high into the sky and his ball stops dead on the front slope of the green, before trickling a touch further down the slope away from pin. Still, that’s in a good position. Niemann, who birdied the previous hole, has landed his tee shot within five or six feet.

Woods safely makes his two-putt to stay at even par. Only seven players are under par for now – Niemann is one of them after back-to-back birdies, following his opening bogey.

After a misty and overcast morning, it’s turning into a perfect afternoon at Augusta. That blue sky is just what we expect.

Woods retains the honour off the tee after pars for Oosthuizen and Niemann and he stays out of trouble by going left on the short par-4 3rd.

It leaves him with an uphill pitch from 140 yards or so, which he hangs into the stiff breeze. It catches the edge of the green before just rolling off into the fringe – but that’s still in a good position.

It’s good enough to open up the possibility of putting from off the green. He doesn’t quite get the roll, though, as the slope takes over but he moves on with his par.

Woods’ drive on the par-5 second fades slightly right, but he’s much happier with that one as it twirls his club and picks up his tee while watching it land short of the right-side bunker. Joaquin Niemann, who has very much found himself centre stage playing alongside Woods today, shows how short he was as he carries the bunker comfortably with his drive.

Woods stays right with his second shot, but he likes its direction as he sets off on a walk after it. It lands short of the green but in a good position to potentially make an up and down for birdie. The hole is pinned in a shallow far left corner on the green.

The pitch has a nice line but skids to a halt about 15 feet short. He gave the birdie a chance but it slides a touch left of the hole, so he moves on with another solid par.

Faced with a tough uphill chip, Woods looks to bump his shot from one lower tier to the upper level. It stops a few feet short of the pin, but holds onto that upper tier.

But how about that putt! Woods rolls in a 10-footer to take par on the opening hole. He made that look easy.

Woods’ walk down the first fairway looked similar to a leading player approaching the 18th green on the final day, given the amount of patrons packed behind the ropes.

His drive down the right stopped short of fairway bunker but landed under the branches of the nearby pine trees.

Woods, standing uphill, was able to lift onto the front of the green, only for the ball to dribble down the slope and onto the fringe – so work to do to come away with an opening par.

Meanwhile, Harrington has reached the turn at -1. A fine start from the three-time major champion as he approaches Amen Corner.

Here he is. After everything he has been through over the last 14 months, Tiger Woods is stood on the 1st tee at Augusta, driver in hand.

Dressed in a bright pink shirt, he stands out as the aerial shots show thousands of patrons gathered around the tee box and packed down the outside of the fairway.

Woods goes right. He’s clearly not happy with where he’s sent his opening drive, but his Masters is underway. And that’s a remarkable statement in itself.

Before Woods tees off in five minutes, Harry Higgs has surged into a share of the lead. The American bogeyed the opening hole but has since made a hat-trick of birdies. Higgs has never won on the PGA Tour but he did finish in a tie for fourth at the PGA Championship last year.