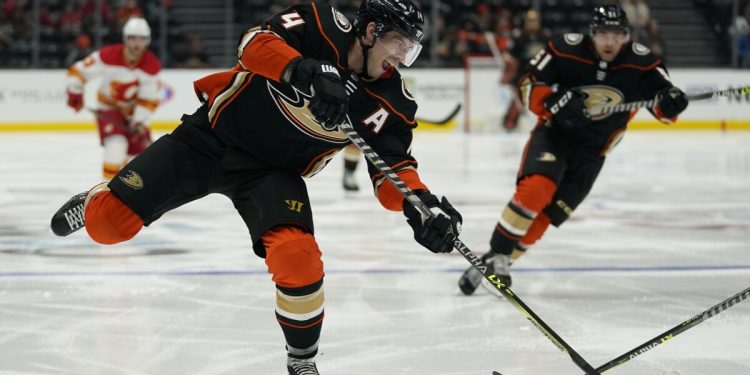 
Michael Stone got his first goal of the season and an assist in his 500th NHL game, and Elias Lindholm scored his 36th goal in the Calgary Flames’ 4-2 victory over the Anaheim Ducks on Wednesday night.

Tyler Toffoli also scored and Johnny Gaudreau got his 96th point on a sharp assist for the Pacific Division-leading Flames, who have won two straight after their first three-game losing streak since January. Jacob Markstrom made 26 saves, and Matthew Tkachuk added an empty-net goal with 35 seconds left.

The high-flying Flames got an unlikely offensive boost from Stone, their 31-year-old depth defenseman. He hadn’t produced a multi-point game since Oct. 17, 2018, but he picked up the second assist on Lindholm’s opening goal before he scored on a slap shot with 9:32 to play.

Trevor Zegras and Adam Henrique scored for the Ducks, who have lost 13 of 14 games since March 6. Anthony Stolarz stopped 24 shots as Anaheim remained competitive with another playoff bound opponent, but again failed to earn a point.

Ducks captain Ryan Getzlaf was a scratch with a lower-body injury in the first game since he announced his decision to retire at the end of the season. The 17-year veteran has missed much of the past month with his injury, but he intends to travel on Anaheim’s upcoming road trip, and he hopes to be healthy for his final home game April 24.

Calgary got on the board in the first period when Gaudreau, who leads the NHL in even-strength points, got the puck behind Anaheim’s net and made an exceptional backhand pass into the slot for Lindholm. Gaudreau is fifth in the league with 62 assists.

Toffoli slipped through Anaheim’s blue line in the second period and roofed his 19th goal of the season, including 10 in 25 games since joining the Flames from Montreal.

Zegras answered for Anaheim late in the second when he got the puck in front from Vinni Lettieri, did a pirouette to his forehand and beat Markstrom through a minuscule opening for his 18th goal. Lettieri’s assist was his first NHL point since Jan. 26.

After the Ducks failed to capitalize on numerous scoring chances in the third, Stone was left all alone for a hard shot that ricocheted in off the bar for his first goal in a season spent mostly as a scratch.

Henrique kept the Ducks close with a power play goal with 8:07 to play, but Anaheim couldn’t equalize before Tkachuk put his 33rd goal of the season into an empty net.