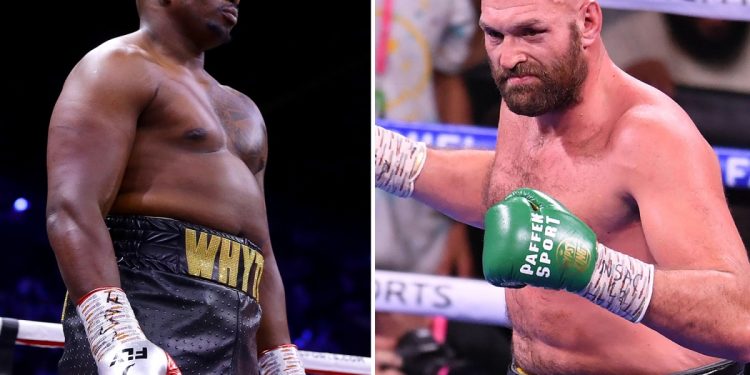 
TYSON FURY versus Dillian Whyte is officially ON after the contract was finally signed.

SunSport understands the £30million all-Brit clash will take place on April 23 at Wembley.

Whyte left it until the very last minute to agree to the WBC world title clash, angering Fury for the last few weeks.

The Brixton brawler is not happy with his 20 per cent cut of the purse, with the Gypsy King raking in the other 80 per cent share.

But he has agreed to his shot at the big time and the chance to hand Fury his first ever defeat.

Victory on the BT Sport show will land 34-year-old Whyte £9million and the WBC heavyweight title.

The Gypsy King has been using his social media to taunt Whyte for not putting pen to paper quicker.

But now he, as well as the British boxing public, will be delighted that terms have finally been agreed for the domestic dust-up.

Whyte has not fought since he avenged his shock defeat to Alexander Povetkin in March last year.

The Bodysnatcher was spectacularly KO’d by the Russian veteran six months earlier but got his revenge with a fourth-round stoppage in Gibraltar.

Fury sensationally completed his trilogy against Deontay Wilder in October, stopping the American in the 11th round, to add to his earlier win and their first-fight to draw.