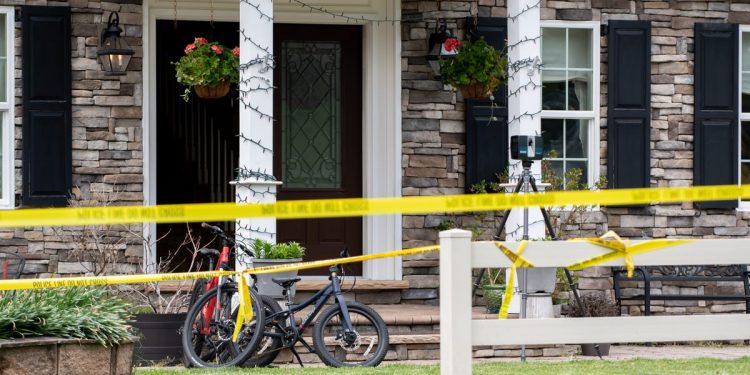 An Upper Makefield mother was charged with shooting and critically wounding her two sons while they lay in their beds early Monday morning, one day before the family was set to be evicted from their home, court documents show.

The boys, Council Rock School District students, are 13 and 10, and are not expected to survive their injuries as they were both shot in the head, authorities said.

Bucks County District Attorney Matt Weintraub said at a news conference Monday afternoon that 38-year-old Trinh Nguyen shot her two sons and tried to shoot a neighbor ― her ex-husband’s nephew ― as he left for work around 7 a.m.

Nguyen, of Timber Ridge Road, was arrested later in the morning after being apprehended in a nearby church parking lot. She was arraigned Monday on four counts of felony attempted homicide and one count of possessing an instrument of crime, which is a misdemeanor.  She was denied bail and taken to Bucks County Corrections.

Charges against her were expected to be upgraded to homicide as her sons were not expected to survive. They were being kept alive on life support so their organs can be donated, Weintraub said.

“It’s a terrible tragedy,” he said. “But perhaps some good can come out of this yet.”

Nguyen was ordered to leave their luxury home, described by officials as a duplex with relatives living in separate units, by Tuesday for failure to pay more than $11,000 in rent, this news organization has learned through court documents detailing the eviction proceedings.

Weintraub told reporters Monday afternoon that investigators had leads on a motive, but said it would be premature to comment on it. He would not comment on the eviction and any role it had in the shootings.

This news organization has independently confirmed through court records that Nguyen was in a landlord-tenant dispute with her ex-sister-in-law, Corinna Tini-Melchiondo, who owns the five-bedroom home in the 100 block of Timber Ridge Road, where Nguyen and her sons lived.

More:Son charged in stabbing death of Newtown Township man. ‘He killed my husband’

On Monday morning, police put out an alert looking for Nguyen, saying she was wanted for a domestic-related attempted homicide involving multiple victims. By noon, she was apprehended and taken into custody.

Police first learned of a problem in the normally quiet neighborhood shortly after 7 a.m.

At about 7:05 a.m., Nguyen gave a box of photos to Gianni Melchiondo, 22, who lived in the other home on the property, according to the DA. She asked him to give the photos to her ex-husband, Weintraub said.

Melchiondo is the nephew of Nguyen’s ex-husband and works with him, and the son of the landlord of the Timber Ridge Road home, according to the criminal complaint.

After giving Melchiondo the box, Nguyen pointed a gun at him and pulled the trigger twice, “but by the grace of God, the gun did not fire,” Weintraub said. The man was able to wrestle the gun away from her, according to court documents.

Upper Makefield police said Nguyen asked for her gun back and said it was not loaded. Melchiondo saw that the gun was loaded, and he went into his home and locked the door, charging documents state.

Nguyen then fled in her minivan, according to Weintraub.

Upper Makefield police arrived at the home shortly after.

Then, an officer and the landlord — Melchiondo’s mother and Nguyen’s ex-husband’s sister ― went into Nguyen’s home and found her sons in their beds with gunshot wounds to their heads, Weintraub said. The boys were rushed to St. Mary Medical Center in Middletown, where they were being kept alive Monday afternoon so their organs can be donated.

At least one boy underwent surgery.

Weintraub said the father of one of the victims, believed to be Ed Tini, was by the boy’s side Monday afternoon. He said the other boy has a different father, and investigators were still trying to locate him Monday.

Exclusive crime coverage‘Video vigilantes’ have come to Bucks County. Are they catching predators or jeopardizing justice?

How Trinh Nguyen was arrested in Upper Makefield

Church officials saw the information the DA’s office had released saying that investigators were looking for her and the vehicle she was driving. They saw the vehicle in their parking lot and notified police, according to Weintraub.

There was evidence that Nguyen attempted suicide, the DA said. She legally owned the gun used, according to Weintraub, and he said it appeared the boys had been shot not long before police were called. In video from WPVI, Nguyen appeared disoriented and wearing a T-shirt and pajama bottoms when arrested.

The DA said it appeared Nguyen was under the influence of drugs when she was arrested. She was taken to St. Mary Medical Center and by about 2 p.m., she was medically cleared for arrest, Weintraub said.

Weintraub declined to say what drugs police believe Nguyen was on during her arrest.

While Nguyen’s social media paints a happy family life, court documents show that she was struggling at least financially before the shootings, and was due to lose her home this week.

Nguyen and her now ex-husband, Ed Tini, moved into the Timber Ridge home after they were married in 2012 and she continued to live there with her sons after he moved out last June, according to court documents.

Nguyen’s lease was terminated in late September, about a month before her divorce from Tini was finalized, court records show.

In November, a claim for more than $11,000 in overdue rent was filed in Newtown Township’s magisterial court against Nguyen. She had agreed in the divorce settlement to pay $2,400 a month in rent, but did not pay from June through December, according to court documents.

A district judge ordered Nguyen to pay $11,500 in rent and other costs in December and she appealed the district court ruling to Bucks County Court of Common Pleas. An order for possession, the final step in an eviction proceeding, was issued in April, with an eviction date of May 3, 2022.

A letter from the landlord’s attorney, dated in late September, suggests there was animosity between the two women. The attorney warned Nguyen of possible legal action if she did not stop engaging in “threatening and verbally abusive behavior.”

The letter accused Nguyen of engaging in acts that “damaged or defaced” the property, including dumping dog feces by her landlord’s front door.

“Such conduct will no longer be tolerated,” the letter said. “The police will be contacted should you act in any inappropriate or abusive manner toward my client.”

The social media posts by Nguyen, however, give no hint of the trouble in her family.

The most recent entry on Nguyen’s Facebook page was in February 2020, showing her two sons with arms wrapped around each other wearing protective helmets and ski boots at what appears to be a winter resort.

On the intro for her page she wrote: “Personal Freedom” followed by three exclamation points.

Photos of her children dominate the social media page including one of her sons and ex-husband posing before a Christmas tree with arms and thumbs raised. Other photos show them on family vacations at the Jersey shore and elsewhere.

Some posts are written in Nguyen’s native Vietnamese.

By 3 p.m. on Monday, Timber Ridge Road and the surrounding neighborhood were quiet again, but barriers sat blocking traffic from the home where Nguyen and the children lived, a nearly 5,000-square-foot Cape Cod built in 1980 on almost three acres, according to property records.

Investigators worked much of the day at the scene of the shooting. Two bikes sat out front of the large home that was surrounded by crime tape.

Council Rock School District released a statement around 1 p.m. that it was aware of the active domestic-related investigation and had been in contact with police. Officials later said support for students would be available.

“I am deeply saddened to send this communication to you in light of the well-publicized tragedy involving two Council Rock students today. A tragic event is always difficult to process for all of us, especially our children,” said Acting Superintendent Susan Elliott. “We tend to process such information in different ways and at different paces. It is not uncommon to experience difficulty eating, sleeping, or concentrating. For more information about how to cope with these types of tragic events, please visit the grief resources on our website … Please know that we will continue to monitor our students and staff and provide them the support they need while they are at school.

‘When these types of tragic events occur in our community, it’s important that we pull together to support each other. I humbly ask you to keep the family, our students, our staff, and our community in your thoughts and prayers.”