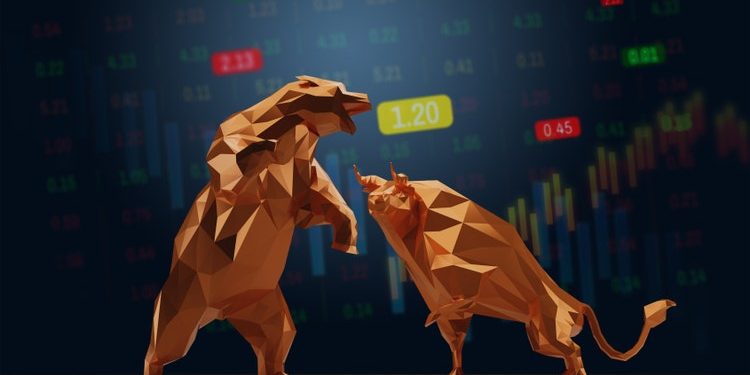 
1. Bulls Stage Counter-Attack: Big buying on Friday as the S&P500 reclaimed the 4400 level and the 50dma. This follows a bullish RSI divergence (and deeply pessimistic sentiment — see the next few charts), and a “Death Cross” (when the 50dma crosses below the 200dma): which is described as a slow-moving bearish signal designed to detect market regime shifts into bear markets/downtrends, but has a patchy record with many false positives…

3. Market Breadth: On the topic of market breadth indicators, interesting to note that the S&P500 200-day moving average breadth indicator is bouncing… from very similar levels to late-2018 (when a string of Fed rate hikes scuttled markets).

5. Consensus Bulls: On the other hand… Consensus Bulls indicator only just dropped below the 50% mark this week (to 49%), this compares to the long-term average of 51.5% (by contrast, this indicator dropped to 22% in March 2020, 18% in March 2009, 36% in Dec 2018). Basically, my read of this is that the market and wider market sentiment is still teetering between correction vs bear market.

6. Buybacks: Buybacks to the rescue? “Firms in the S&P 500 have outlined buyback plans valued at $238 billion through the first two months of 2022, according to data from Goldman Sachs, a high for this point in the year.”

7. Margin Debt: Deleveraging progress check… another d-word for this one though is that of divergence. More shoes to drop?

8. Sentiment, Positioning, and Leveraged Bets: In the scheme of things though, investors are still fairly all-in (despite morose sentiment), especially leveraged longs.

n.b. The blue line in the chart is combined margin debt, speculative futures, and leveraged ETFs (standardized against market cap), the black line is average portfolio allocations to equities from the AAII portfolio survey and ICI total AUM figures.

Key point is that despite extreme pessimism in the sentiment surveys, investors/speculators have not yet capitulated and made their move on actual positioning.

9. Speaking of Capitulation… No capitulation in US Equities, but definitely an element of capitulation in China. Global investors have been dumping Chinese stocks at a record pace (perhaps spooked by geopolitical/country risk following what happened with Russia… not to mention “unfriendly macro” e.g. property, etc.).

Feeling Divergences: Surveyed sentiment is in a state of deep pessimism, and yet economic sentiment still remains fairly optimistic (for now).

This chart shows a composite view of economic sentiment (manufacturing, consumer, small business, housing industry, services sector) and compares that against the same for investor sentiment (surveyed bullishness in the AAII and Investors Intelligence surveys). Clearly, there is a sharp divergence of opinions when it comes to the market vs the economy…

It’s interestingly quite similar to what I noted in the Weekly Chart Storm: investor sentiment stands in sharp contrast to investor actual positioning (i.e. they are very bearish, but have not really reflected that in their portfolios or leveraged bullish equity bets). Makes you wonder if there are further shoes to drop, so to say, with regards to economic sentiment and investor positioning.

Going back to the economy, another chart that caught my eye this week was the divergence between the US Consumer Confidence surveys…

In an intriguing development, the University of Michigan consumer sentiment index has wildly diverged to the downside vs the Conference Board consumer confidence index. You have to go all the way back to the… ’70s to find a similar type of divergence.

That last statement should be informative. We basically have a commodity shock of a similar nature (geopolitics driven) and magnitude (especially considering the breadth of the surge in commodities) to what happened (twice) in that decade.

The UoM survey has a greater emphasis on prices, and so we can only assume that the UoM survey is basically giving us a truer picture of how the consumer really feels in the face of runaway inflation.

Surging inflation presents a real headwind and headache to consumers and the economy at large. And more to the point gives cause for the Fed to get its act together in attempting to rein-in surging inflation expectations.

Challenging times ahead for consumers, and investors.

‘We lost to a championship program,’ Creighton coach says of Kansas Jayhawks basketball