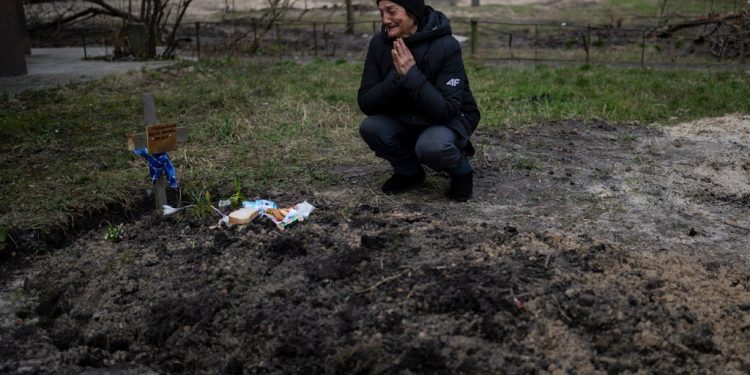 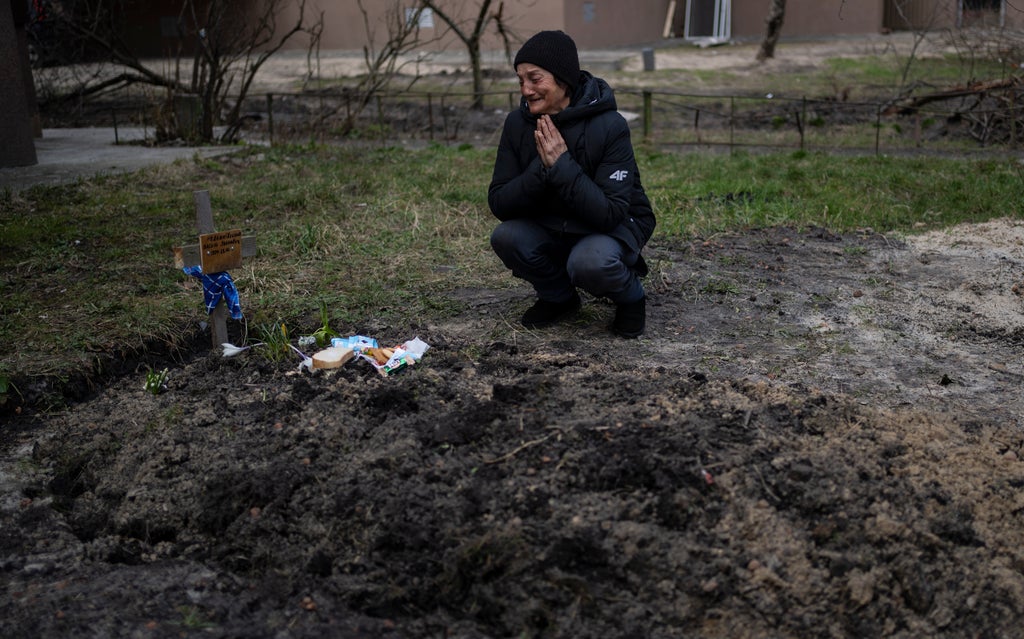 Ukrainian MP has called for the “denazification of Russia” and for images of the nation’s alleged war crimes to be “shown on Russian television every single day”.

Inna Sovsun, the deputy leader of the Holos party, said Russia is committing genocide following the “terrifying” attack on the city of Bucha, where dead civilians have been left strewn across streets and piled into mass graves and there has been widespread evidence of rape.

Denazification is one of the supposed justifications Russian leader Vladimir Putin has given to his people for the invasion but Ms Sovsun likened the conflict to the Second World War, maintaining Ukraine is the country attempting to defend itself from a “Nazi regime”.

“They’re killing us, not as individual human beings, but because we’re Ukrainians,” Ms Sovsun, who is currently in western Ukraine, told the PA news agency.

“That is an act of genocide (and) I understand it will take effort to prove that, but we shall not stop until we prove it.

“Hatred to one nation because of simply belonging to the nation and killing because of that hatred is an act of genocide… that is what the whole world needs to know.”

Ms Sovsun said she believes there is widespread hatred towards Ukrainians from Russian soldiers and many of its people, driven by the country’s propaganda machine.

“They’re the Nazis – of course they are,” she said.

“Don’t be fooled by this saying that it’s just Putin… I hope he dies in suffering but that will not stop the hatred of Russian soldiers towards Ukrainians.

“These could have been random acts of cruelty on the side of the Russian soldiers – but it was not, it was fed to them that they have to hate Ukrainians – that Ukrainians are not equal human beings.

“This is the Nazi state, this is what we’ve been trying to tell the world for a month now… the whole world needs to step in.”

Ms Sovsun said evidence of Russia’s war crimes should be made into movies and shown on Russian television “every single day”.

“Denazification of Russia, that is what we need,” she said.

“The names of the people who did that need to be known to every single Russian, their parents, their wives, their children need to be blamed for what they did.”

Ms Sovsun said she understands that trying the Russian state for alleged war crimes could take years or decades, but added: “But we have to pursue that – just in memory of those people who have been killed and raped there.”

She said the West should be arming the Ukrainian military to avoid a repeat of what happened in Bucha.

“Help us prevent more victims – that is even more important than doing justice to the victims that we already have,” she said.

“I just don’t want to know that people who are alive now can be saved but they won’t because someone is concerned about the price of gas in Europe.”

The MP said the level of shock she has experienced from seeing images from Bucha and other worst-hit areas is “so big, you can’t even cry”.

“The whole of society is extremely traumatised by those images and the level of trauma is just huge,” she said.

“I can’t cry, this level of shock is just so big that you can’t even cry… it’s just terrifying.”

Ms Sovsun is from northern Kyiv, near Bucha, and said the pictures of bodies lying in the streets and in surrounding villages are keeping her up at night.

“I have this image in my head… The women were naked or half-naked – naked from the bottom, so we can assume they could have been raped or at least assaulted, and then they killed them,” she said.

“They put the bodies on top of each other and they put the tyres on them and set those on fire.

“It’s unimaginable what was happening to those women and imagining the last minutes of the life of those women.

“This is the image that I can’t get out of my head: (I saw) a picture of a dead woman and she was wearing sneakers which are similar to the ones I have, like New Balance sneakers.

“But I was just thinking, ‘She’s just like me, who had similar tastes – we probably were shopping in the same shops (and) driving on the same road because that is a road I take to visit my parents.