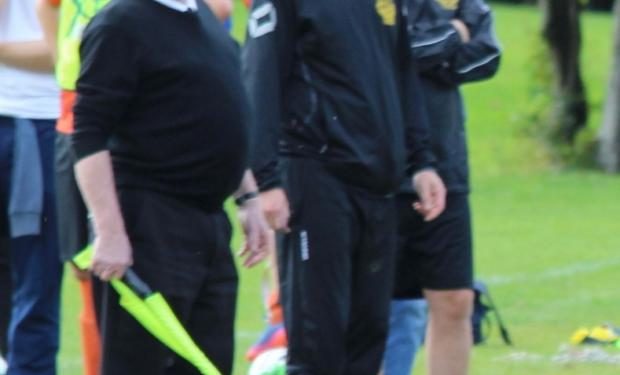 
WEST KILBRIDE Amateurs secured the division one title with a win versus Drongan on Saturday, though to everyone involved with the club, it meant far more than just a trophy.

Involved in the club for most of his life, Alistair lived and breathed for the club.

Manager Stuart Whitehill explained, when he took over four years ago, he promised Ally he would take the side back to the Premier League.

He duly delivered that this year, however the great man was unfortunately not there to see it, having passed away in late 2021 leaving a gaping hole in the local amateur football scene.

Stuart said: “I am just so happy we lifted the title for him. He was by our side every step of the way.”

Alistair Dick (front) with Stuart Whitehill (behind) and son Paul (back)

This was no normal amateur football season.

West Kilbride Amateurs went on a remarkable seven-game winning run to seal an incredible league triumph as a late club legend looked down to ensure his team got the rub of the green, when needed, to get over the line.

“He was monumental,” said captain Stevie Moran, fresh from scoring the winner which brought title glory.

“We’re still struggling to do all the jobs he did between four or five people. He held the strips, got them washed, picked up, dropped off, sorted buses, organised fundraisers for kits and training equipment, lining the pitch…

“West Kilbride always kept going as long as he was there. He was the bedrock for us when there was uncertainty at lots of clubs. That was his legacy: Mr West Kilbride.

“He left a huge hole, at an emotional level, massive. So, we, all of us, truly did it for him.”

The style with which the Budget Blinds Division One title was grasped on the final day of the season – the only time the Ammies were top, perfect timing – was Hollywood-esque, with a flurry of late goals and players stepping up to deliver defining moments in this season and their careers, all encapsulated within a sense of their being a greater purpose behind it all.

From Andrew Wentworth’s “first goal in 15 years”, a blistering volley into the top right-hand corner, down The Glen to go 3-2 up against long-time leaders Galston before goalkeeper and The Herald’s own Murray Grayston saved a highly debatable penalty to secure the win, to Callum Kerr’s volley which crashed in off the bar to beat Crosshouse in the last minute, it was a run defined by team spirit, selflessness and commitment to the cause.

A run befitting the man who was at the centre of the village’s thoughts on Saturday.
In the game following Alistair’s death, West Kilbride were humbled by Crosshouse down The Glen as the emotion of the occasion was too much for the squad.

They got their revenge in the title run, after late winners against Dalry and Crosshouse had sparked momentum before the dramatic victory over Galston.

A victory over Catrine and derby win at Largs set up a final-day crunch game against a Drongan team who’d won the reverse fixture.

Alistair’s son, Paul, is assistant to manager Stuart Whitehill and called for focus following the Largs game, and his other son, young Alistair, and widow Olive were in attendance for another thrilling late show from Kilbride.

After David Mills (twice) and Rory Campbell had found the target in East Ayrshire, captain Moran scored from a ricochet after hurling himself at a defensive clearance with around seven minutes to go, sparking a memorable day and night for the club in honour of one its greatest servants.

“It was a poor goal but the best goal I’ve ever scored,” said Moran. “I got up well for a set piece and I thought the header was in, screamed at the ref for the goal, then flung myself at the defender’s clearance when he didn’t give it and it went in off me.

“When I turned around, I checked with the ref again and by then there was 30-odd folk on the pitch, delirium, so I emulated our top scorer Macca (Greg McVeigh) and did the longest knee slide in history.

“We showed grit, determination and resolve to get over the line time and again. I’m so proud of every single member of the squad, they all played a part.

“The release was incredible. I went to Paul and young Ally, because it WAS for him. I loved Alistair to bits, it was a very emotional day. It couldn’t have gone any better.”

New trailer for Game of Thrones prequel, House of the Dragon, is full of drama – New York Post