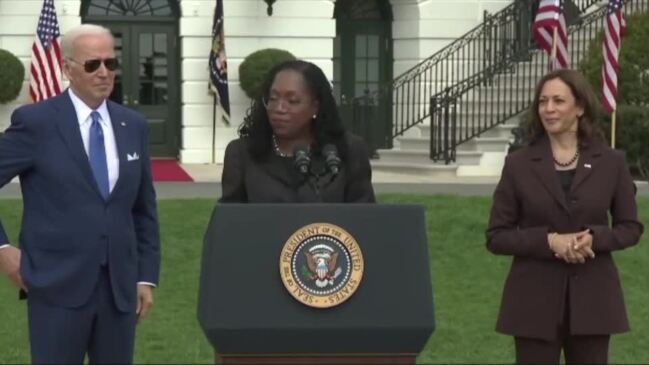 Judge Ketanji Brown Jackson delivered remarks outside of the White House alongside US President Joe Biden and Vice President Kamala Harris on Friday, April 8, following her historic confirmation to the US Supreme Court. Judge Jackson spoke about the honor and responsibilities of her new role, thanking colleagues and people “all over the world” who supported her. “It has taken 232 years and 115 prior appointments for a black woman to be selected to serve on the Supreme Court of the United States. But we’ve made it,” she said. To conclude her speech, Judge Jackson quoted author Maya Angelou’s poem ‘And Still I Rise’ and received a standing ovation. “I rise bringing the gifts that my ancestors gave. I am the dream and the hope of the slave,” she said. “Thank you again Mr President, the members of the Senate, for this incredible honor.” Jackson will replace retiring Justice Stephen G Breyer when he steps away from the court. Credit: The White House via Storyful