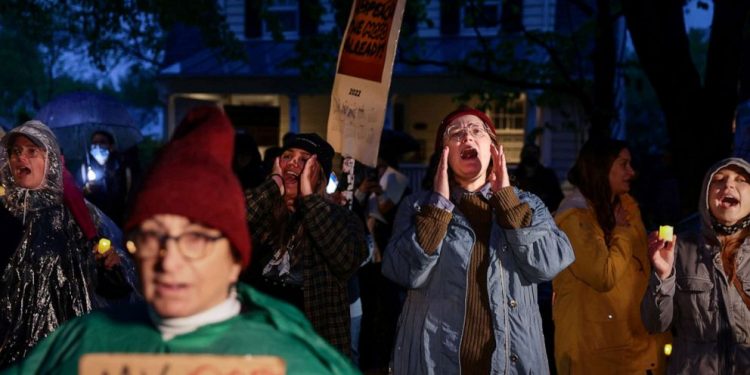 The homes of Supreme Court justices are the newest site for protests over abortion access in the United States.

Activists gathered Saturday in the rain outside the Maryland residences of Chief Justice John Roberts and Associate Justice Brett Kavanaugh to protest a leaked draft opinion reportedly supported by the court’s conservative majority.

The document, reported by Politico last week, showed the panel is poised to repeal Roe v. Wade. The court confirmed the draft’s authenticity but reminded Americans it is not the final ruling. A decision in the case, which centers on a Mississippi abortion restriction, is expected by the end of June or early July.

Protesters held signs that read, “Never Again” and “Don’t Tread on My Choice.”

The demonstrations sparked a response Monday from the White House that justices shouldn’t have to worry about their “personal safety.”

“[President Joe Biden] strongly believes in the Constitutional right to protest,” press secretary Jen Psaki said in a Twitter post. “But that should never include violence, threats, or vandalism. Judges perform an incredibly important function in our society, and they must be able to do their jobs without concern for their personal safety.”

Republicans had accused the administration of not condemning violent threats after Psaki’s initial response to protests taking place at the justices’ homes.

“These activists posted a map with the home addresses of the Supreme Court justices. Is that the kind of thing this president wants to help your side make their point?” Fox News reporter Peter Doocy asked during her daily press briefing May 5.

Officers from the Montgomery County Police Department were on the scene as the protests unfolded, as seen in photographs from ABC affiliate station WJLA. The department did not immediately respond to ABC News request for comment. There didn’t appear to be any reports of violence or vandalism during the protests.

Senators Chris Coons, a Delaware Democrat, and John Cornyn, a Texas Republican, on Monday introduced legislation that would allow the Supreme Court Police to provide all nine justices and their families with around-the-clock security protection.

The U.S. Marshals Service said Monday they are assisting the Marshal of the Supreme Court regarding increased security concerns in the wake of the leaked draft opinion, but didn’t comment further on specific security measures. Two federal law enforcement sources told ABC News that steps have been taken to beef up security details around the individual justices, including at their homes.

ShutDownDC said 100 people were part of Saturday’s protests in the Chevy Chase neighborhood where Kavanaugh and Roberts live. It’s unclear if the justices or their families were home at the time.

The group has another protest planned for outside the home of Justice Samuel Alito on Monday night that will include speakers, a candlelight vigil and quiet moments of reflection.

Alito was the author of the Feb. 10 draft opinion, in which he wrote, “Roe was egregiously wrong from the start.”

“It is important that we gather in this way because attacks on abortion rights represent not only a violation of our autonomy over our own bodies and an invasion of privacy between us and our doctors, but also a real and symbolic victory for those who would like to strip even more rights from us – among them contraception, gay marriage, privacy and safety from state scrutiny of our beliefs – and still more from our Black, brown and Indigenous friends and siblings,” ShutDownDC’s Hope Neyer told ABC News.

The bombshell draft opinion on Roe sparked rallies from both abortion rights activists and anti-abortion protesters across the country. A nationwide day of action is planned for Saturday, May 14.

An “unscalable,” eight-foot-high fence was placed around the Supreme Court building last week. Neither the court or law enforcement officials have said anything publicly about possible threats to the institution or the justices, who are set to return in-person for a private conference on May 12.

Republicans are condemning the protests, with Sen. Ted Cruz equating them to “mob violence” even though there were no reports of violence.

“It is disgraceful,” Cruz, R-Texas, told Fox News on Sunday.

ShutDownDC responded to Cruz’s comments, telling ABC: “We are exercising our constitutional right to gather and demonstrate and intend to continue to do so regardless of whatever aspersions people like Ted Cruz who are scared of our collective power might cast.”

Democratic strategist Paul Begala also chimed in on the protests in front of Roberts and Kavanaugh’s homes, saying they could do more harm than good.

“This is wrong, stupid, potentially dangerous, and politically counterproductive,” Begala wrote on Twitter.