Why is Putin obsessed with Ukraine? 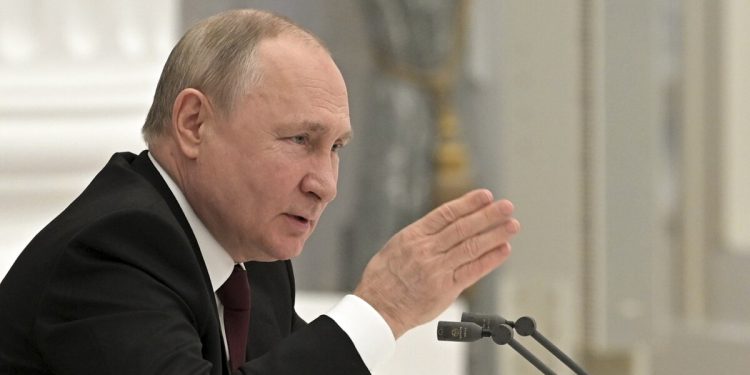 A Russian invasion of Ukraine has appeared imminent for days, if not weeks, as anyone who has been paying attention to the news knows.

But on the minds of many is why Russian President Vladimir Putin is so obsessed with Ukraine.

Putin has massed more than 150,000 Russian troops along Russia’s border with Ukraine’s east and southern edge — where Moscow already occupies territory — and in Russian ally Belarus on Ukraine’s northern border.

The U.S. government says it believes Putin can easily launch an invasion from either front any minute now.

An incursion into Ukraine’s east might be easier since Russia illegally annexed Ukraine’s Crimea peninsula nearly eight years ago and has been backing Russian proxy militias against Ukrainian forces in the east ever since.

Moving in from Belarus in the north might be even more ominous because Russian forces would be within a couple of hours’ drive from the Ukrainian capital of Kyiv.

But whether an invasion begins, there are questions still worth examining.

Among the most important: Why is Putin so obsessed with Ukraine?

There’s a Russian adage that you can’t have a Russian Empire without Ukraine, owing to its long cultural and economic history as the beating heart of the defunct Soviet Union. And Putin is hell-bent on re-creating a new empire to restore his declining country to superpower relevance.

To understand how Putin views Ukraine, and why it’s so entangled in his mythology, first look at a map.

Belarus, Ukraine and Georgia — in that order north to south — are former Soviet Union republics that broke away into ostensibly independent nations after the Communist power collapsed in 1991. They sit like a massive land barrier between Russia and Europe to the West.

Ukraine is the largest, a minerals-rich vast land of fertile fields.

Tiny Georgia was invaded by Russia in 2008, and the two fought a brief war. Then, as now, Moscow accused Georgia of attacking pro-Russia breakaway enclaves like South Ossetia. France negotiated a cease-fire that ended most fighting, but Georgia did not regain the disputed territory.

Belarus, along with several other former Soviet republics, have, or had, Kremlin-friendly leaders. But Ukraine broke from the pattern in a 2014 revolution that seated democratically elected officials and moved the country solidly toward the West. The then-pro-Russia president, Viktor Yanukovych, fled to Moscow in what became known as the Maidan Revolution.

Ukraine had also served as a lucrative source for Putin’s coffers. A Russian gas pipeline crosses Ukraine en route to Europe, ginning big profits for Moscow — money that Putin used to co-opt friendly Ukrainian politicians as well as to buy off his oligarch cronies, according to Russia experts and former diplomats.

But Ukraine was stepping out of Putin’s sphere of influence. He has been trying to get it back ever since. In that same year, 2014, Putin began eating away at eastern Ukraine, declaring swaths like the Donbas to be Russian because many people there speak Russian and have Russian passports.

A former KGB operative, Putin has said the collapse of the Soviet Union was one of the greatest disasters of modern history. He has publicly stated that he does not regard Ukraine as a real country, nor Ukrainians as separate people. Much of the West, probably unwittingly, bought into part of the narrative by referring to Ukraine as “The Ukraine,” the way Putin and Russian nationalists do. It would be like Americans referring to “The South” or “The West,” parts of the U.S. not separate countries.

Franklin Foer, a writer at the Atlantic magazine who traces family roots to what is today Ukraine, argues that Putin is less concerned about Ukraine joining NATO than he is about Ukraine becoming part of Europe “with its insistence on rule of law.” Ukraine signed an “association” agreement with the European Union, on March 21, 2014, a month after the Maidan Revolution and the same month Putin took control of Crimea.

Rule of law and a campaign against rampant corruption, both of which the U.S. and Europe have been urging on Kyiv with some success, further robs Putin of a tool to control or manipulate the country and its potential quislings, analysts say.

“What he feared most was Ukrainian democracy, which would deprive him of influence over the colonial possession that he felt was his birthright,” Foer wrote last week.

U.S diplomats in Europe — including ambassadors to Russia and Ukraine — warned throughout the 2000s that showing any inclination toward incorporating Ukraine into Western organizations like NATO would be “neuralgic” for Putin.

Putin now may not want to take over all of Ukraine, but he certainly wants to swallow up enough of the country to render it a submissive ghost nation, experts and analysts say. One scenario floated by U.S. intelligence is that Putin would make the invasion swift and only long enough to install a new leader.

“The fundamental crisis will not end,” Carl Bildt, former prime minister of Sweden and now a senior envoy in Europe, said on Twitter, “until Putin leaves the Kremlin and [Russia] finally decides whether it will build a modern nation state or whether it still seeks an empire.”