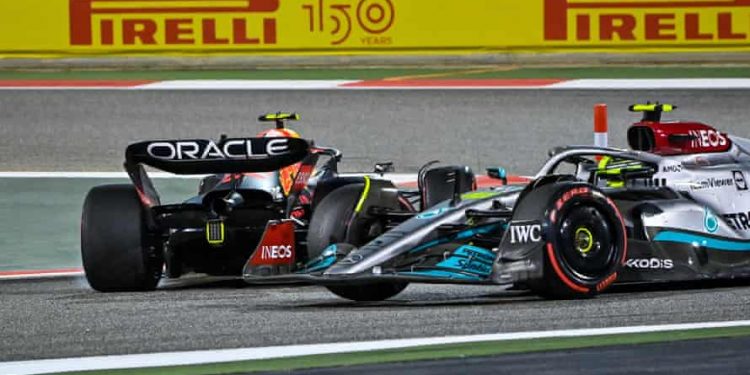 
The Mercedes team principal, Toto Wolff, has conceded his team and their seven-time world champion, Lewis Hamilton, are not in contention for the Formula One world titles after the season’s opening race in Bahrain. Hamilton has acknowledged the team have no quick fix for the fundamental problem afflicting their car as they struggle to get the best out of it in the season’s initial meetings.

The somewhat shocking admission from the previously all-conquering Mercedes squad who have won the last eight consecutive constructors’ championships and seven of the last eight drivers’ titles comes after their competitive position in this season’s F1 field was confirmed in Bahrain, with Mercedes some way off the pace of Ferrari and Red Bull.

Ferrari took a superb one-two victory with Charles Leclerc and Carlos Sainz in the race on Sunday. Hamilton and his teammate George Russell were third and fourth, but in positions that flattered to deceive. They took the places after both the Red Bulls of Max Verstappen, the world champion, and Sergio Pérez suffered fuel system-related retirements late in the race.

Until that point the Mercedes cars had been fifth and sixth, well off the pace of the two leading teams. At just over mid-distance the four front-runners all had an advantage of more than 15 seconds over both Mercedes, with Leclerc in front, a full half a minute up on Hamilton.

Mercedes had been fully aware they were struggling, their car suffering from the downforce stalling-related problem known as porpoising. With the evidence from Bahrain, Wolff acknowledged that until they solved the issue they would be in no position to mount a challenge.

“If you look at the pecking order today it seems a very long shot to even think about being in contention for any of the championships,” he said. “Realistically when you are third on the road you can’t think about winning it.”

Hamilton, who has been positive despite the setbacks his team face, was clear that the problems will not be solved before this weekend’s meeting in Saudi Arabia, noting that the issues cannot be addressed merely by adjusting the setup of the car.

“I’m hoping for the next race we manage to find some improvements,” he said. “But it’s a fundamental issue that’s going to take a little bit longer to fix.” He was, however, pleased with the way his Mercedes team had reacted to their setbacks. The team have previously shown fortitude and dedication to fight back against a strong Ferrari in 2017 and 2018, ultimately taking victory, and last season were resilient in forcing the title fight to the wire against Red Bull and still securing the constructors’ championship despite Hamilton’s disappointment in losing the drivers’ title in the controversial finale.

“Given that we have been faced with these challenges which we were not expecting, no one’s been down during this phase where we’ve been struggling,” Hamilton said. “Everyone’s stayed positive, everyone’s just kept their head down and kept working. No one’s moaned and that’s great to see.”

Wolff said it was up to the team to “regain land, centimetre by centimetre”, in what will clearly be a drawn-out fightback and that they could not simply throw parts at the car until they had solved the main issue with the porpoising. Optimism remains that when they do so they will be able to be very competitive, as Wolff was expectant they could “unleash the performance that we hope to be in the car”.

Red Bull’s team principal, Christian Horner, said he believed his team and driver Verstappen would recover from their disappointment to come back, buoyed by the pace they showed before the mechanical failures in Bahrain. “Maxi is obviously disappointed but he’s pragmatic,” he said. “It’s a long year and he knows we’ve got a good car.

“We’ll understand this issue, get on top of it, and come back next weekend. I’m looking forward to getting to next weekend. the encouraging thing is we were within a tenth of pole, fighting with Charles for the win. The regulations look like they’ve created that bit of that racing.”