Years after moving to L.A. from Guatemala, her dreams of a mobile plant shop came true 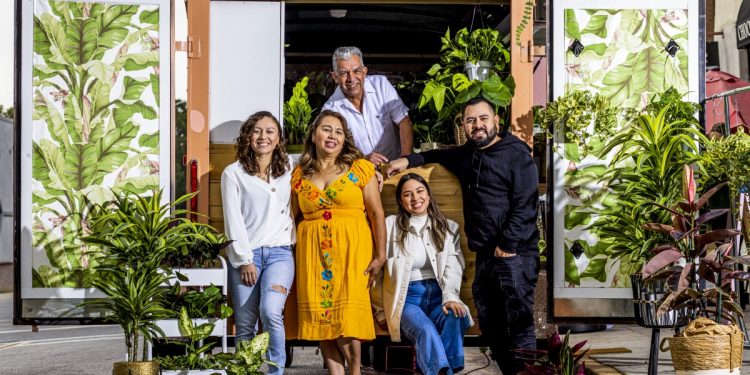 
In our Plant PPL series, we interview people of color in the plant world. If you have suggestions for PPL to include, tag us on Instagram @latimesplants.

Nearly two years after opening their mobile plant shop Pasadena Roots — a terracotta-toned trailer so delightful it is often mistaken for an ice cream truck — Vilma Alvarado, 55, and her daughters Wendy, 30, and Cindy, 34, are confident about one thing: community matters.

A lot of good is going on in Los Angeles, says Wendy, a high school English teacher and proud first-generation Latino immigrant.

“Being out and about selling plants on the streets has allowed us to form connections and meet so many wonderful human beings from all walks of life,” she says. “Plants have continued to allow us to grow as individuals and connect with our community through a completely different lens. We are able to learn about others’ experiences and their stories through plants.”

Twenty-five years ago, when Vilma and her husband, Edwin, left Guatemala in search of a better life in Los Angeles, she found herself without a job — an odd position for a woman who had owned and operated her own juicery in a central market.

Eventually, she found work cleaning houses while raising her three children, including Edwin Jr., but like so many domestic workers in L.A., her work disappeared with the spread of the coronavirus in 2020.

Vilma and her daughters have a tight bond. When the world shut down during the pandemic, it served as an opportunity for them to seek solace together in plants.

“We couldn’t do anything, but we could do some social distancing and repot plants and swap plants and cuttings,” says Wendy. “We would post plant things on our personal Instagram and people started asking us for advice and where to buy plants.”

As interest in their plant content increased, they began to wonder if they were on to something. Wouldn’t it be great, they thought, if they could turn their love of plants into a business?

Their first plant pop-up was more of a cautious experiment than a serious retail endeavor. After driving around Highland Park, they set up a table and tent and sold a variety of plants they purchased with Vilma’s bonus. (“She planted a seed,” Vilma now says of the woman who gave her the gift.) They were overwhelmed by the positive response. “People were working from home and were super excited to see a pop-up plant shop in the middle of nowhere,” Wendy says.

Little by little, Vilma’s dream of becoming a small-business owner again was becoming a reality. In January 2021, after hosting a pop-up inside the Mercadito Monarca shop in Pasadena , they hosted their first official event at Cervecería Del Pueblo, also in Pasadena.

After being closed for months during COVID-19, the brewery sold out of beer, and the plants flew out the door. “Everyone was so excited,” Wendy says.

Last March, the women decided they needed to “step up their display game.” Transporting delicate plants in high quantities was challenging, but they weren’t ready to invest in a bricks-and-mortar store. When they spotted a cargo trailer on OfferUp, they knew they had found the answer to their prayers and drove to Long Beach to purchase the black cargo trailer they lovingly refer to as “La Chula” (cutie) for $5,000 — their entire business savings.

Working together as a family, including Edwin Sr. and Edwin Jr., they gave the trailer a glow-up with new flooring, a pop-out window, a pink neon sign and whimsical floral wallpaper. They then painted the exterior a festive terracotta color to make it pop on the streets of L.A. and commissioned Compton muralist Mel DePaz to adorn the truck with trailing ferns, monstera leaves and anthuriums.

“The stars aligned,” Wendy says. “It felt like the right next step. It’s our pride and joy.”

Like the taco trucks that have galvanized L.A.’s food scene, the trailer gave them the freedom to attend pop-ups across town whether outside Género Neutral in Echo Park or Good Mood Creative Space in El Sereno.

“The ladies of Pasadena Roots are a gem in our community and we love to support them in any way we can,” says Erica Gutierrez of Mercadito Monarca. “As BIPOC- and women-owned businesses, we support and uplift each other. We plan to continue collaborating on events with them this year.”

Last November, about two months after meeting Daniel Buezo, co-founder of the Los Angeles brand Kids of Immigrants, on Sunset Boulevard during a weekend pop-up, he invited them, along with 12 other BIPOC small-businessowners, to sell their products at the Kids of Immigrants booth at ComplexCon, a popular streetwear trade show in Long Beach. Although it was advertised as a Kids of Immigrants booth, Buezo decided not to sell anything and instead chose to spotlight other Los Angeles businesses including the Alvarados, who sold plants, pots and a tote inscribed with “Proud of My Roots,” which they designed with Kids of Immigrants.

The opportunity was more than just a chance to network: The exposure led to a surprise grant of $5,000 for all 13 participants from UPS, a company that has been investing in small businesses in need of support.

Thanks to the grant, the money covered the purchase of La Chula, and the family had money in its business account once more.

“We wanted the message to be that we can come together and support one another within our communities,” Buezo says. “Pasadena Roots started a business from scratch during the pandemic, and they are doing it as a family. The fact that Cindy and Wendy are doing it with their mom is so touching. As another first-generation immigrant, I relate to what they are doing. We can help one another in so many different ways, and that’s what we created at ComplexCon. For us, it was about community over competition.”

In retrospect, it seems unbelievable to the Alvarados that they are street vendors. Still, they are grateful. They know that people can buy plants at big-box stores and are appreciative that Angelenos choose to shop with them instead.

“People want to support Latino and Latina-owned businesses,” Wendy says. “We are first-generation Latino immigrants and have very strong ties to our parents. People identify with what we are doing.”

Vilma is eloquent when she talks about her gratitude for the community. “There are so many people from all different backgrounds who are willing to help and support our small business,” she says. “I’ve gained confidence to get out of my comfort zone and work with other communities.”

She’s also reminded of the importance of family. “I couldn’t do it without them,” she says of her daughters. “Whether it’s posting on Instagram or buying plants, there’s always someone to pick up the slack.”

Meanwhile there are more pop-ups to plan, including one at Edwin Jr.’s cellphone store in Pasadena. They also hope to host a “support your neighbor” event in April modeled after Buezo’s inclusive community-first business model.

At a recent Saturday sidewalk sale outside Car Artisan Chocolate in Pasadena, Cindy mused on what she has learned over the last two years.

“Running a small business takes a lot of work and consistency, but it’s worth giving your dreams a chance,” she says. “You’ll never know unless you try. I’ve learned to trust the process of growth in all areas of my life, and I’m extremely grateful for all the support we’ve received these past two years from our community. Honestly, it doesn’t feel like work.”

How Does Social Media Affect ‘Life Satisfaction’ in Kids?

How Does Social Media Affect 'Life Satisfaction' in Kids?