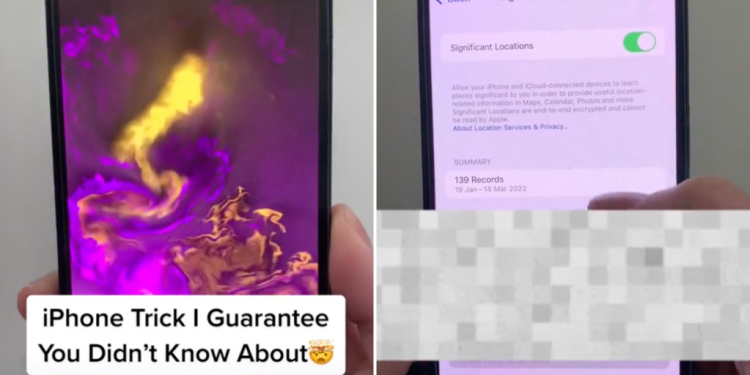 
Your iPhone tracks your real-world movements and you can view where you’ve been on a hidden map.

The little-known feature is buried deep within your Settings and shows your most frequently visited locations over the past few months.

The feature was launched a few years ago and was the subject of a recent viral TikTok video.

User @techhackguy brought the feature to the attention of thousands of people, claiming that iPhones are “spying on everyone.”

What is iPhone Significant Locations?

Your iPhone has a feature called Location Services, which uses your location to improve various features on the device.

This includes Significant Locations, a rolling log of your real-world movements, which are then used to offer other services.

For instance, if your iPhone knows about your daily commute, it can provide tailored timing information about your journey.

“Allow your iPhone to learn places significant to you in order to provide useful location-related information in Maps, Calendar, Photos and more,” Apple explains.

You might be panicking that Apple is keeping a log of your every move, but that’s not quite the case.

“Significant Locations are encrypted and cannot be read by Apple,” according to Apple.

That means that the location info is stored on your iPhone, and is encrypted and dissociated from you if it needs to leave the device.

No outsiders can see your Significant Locations, and they’re not accessible through iCloud either.

And even if a pal is using your iPhone, they can’t get into Significant Locations without getting past a Face ID or Touch ID lock first.

However, if you’re really worried that a spouse might sneak their way onto your iPhone and catch you at the pub when you were supposed to be at work, it might be worth deactivating the system – or clearing your history at the very least. We’ll explain how to do that below.

It’s also worth mentioning that Significant Locations is opt-in, although you probably never knew that.

It turns on when you activate Location Services during iPhone set-up, but it’s buried beneath several layers of Settings, so most people have no idea it exists.

The location data tracks back around a year.

How to find your iPhone Location Map

First, launch the Settings app on your iPhone, then tap on the Privacy section.

Then click on Location Services and scroll to the very bottom of the page, where you’ll need to tap on System Services.

Go to the Significant Locations tab, at which point you’ll be asked to log in with Face ID, Touch ID or your passcode.

You should see a long list of cities, which you can tap into to find various locations you’ve previously been at.

All of these locations are time-stamped, and are included on a map at the top of the screen.

It may even highlights your ‘Home’ and ‘Work’, which should be your most-visited destinations.

How to delete iPhone Significant Locations

There are a few ways to clean up your Significant Locations on the iPhone.

The first is to simply toggle Significant Locations off when you’re in the correct menu.

You can also hit the Clear History button inside Significant Locations, which deletes your locations collected so far.

Alternatively, you can toggle Location Services off entirely, although this means you’ll lose out on some really useful mapping features.

We’ve asked Apple how frequently the tracker updates with your location, and how it works out where your home and work addresses are.