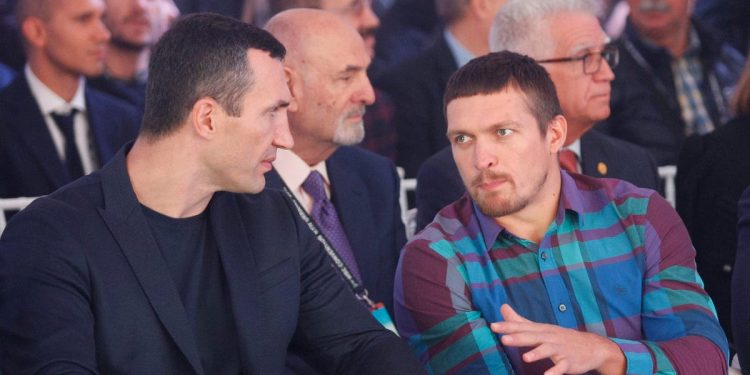 
The Klitschko brothers are encouraging Oleksandr Usyk to deliver an “important message” in his upcoming championship boxing match.

“To have the Ukrainian flag raised and our anthem played and one of our ambassadors of our country out there in the world with the right mindset could be more positive than negative,” Wladimir said, according to Boxing Scene.

Many of Ukraine’s most notable figures in combat sports are either in the country with their families or helping the nation in its war efforts against the ongoing Russian invasion.

They are not the only boxers involved. Legendary heavyweight Vitali Klitschko is a former champion who is now mayor of Kyiv.

Most Ukrainian men aged between 18 and 60 are not permitted to leave the country in case they need to be called to fight, Washington Post reported earlier this month.

Parents with three or more children are exempt from this and as Usyk is a father of three, he is free to leave.

The 35-year-old boxer is in the midst of a hall-of-fame career having won gold at the 2012 Olympic Games before presenting a case as the greatest cruiserweight of all time. As a cruiserweight, he won all of the major championships in the division, beating top tier fighters like Marco Huck, Mairis Briedis, and Murat Gassiev.

After clearing out the 200-pound division, Usyk moved to heavyweight and, in his third bout in boxing’s glamor division, defeated Anthony Joshua to claim three major titles with an impressive performance.

Usyk is contractually-bound to a rematch with Joshua and, despite Russia’s war with Ukraine, has agreed to contest the second bout in June.

For the Klitschkos, this presents an opportune moment for Usyk to use his platform and the promotion to talk about the situation in Ukraine.

“A very important message could be carried through an event like this,” Vitali said, according to Boxing Scene.

“We do not know if in three months we will exist. I actually have plans to speak to Oleksandr Usyk to give him advice if he decides to make the fight, to have some special messages that he can put out there.”

Wladimir added: “We need support. Since the beginning of the war, the economy is down to nothing, but please don’t forget we are defending democratic principles of freedom and free choice.”

Sky Sports reports that Saudi Arabia could host the Usyk vs. Joshua rematch.